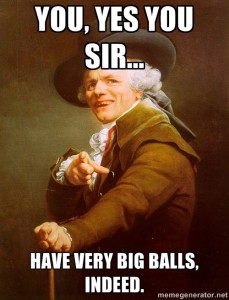 THAT is exactly what it takes to to go toe-to-toe or nose-to-nose with an appropriations chairman when you are an agency head.  THAT is apparently what has happened this week inside our fair capital city.

The story started with the legislature’s elimination of the Department of Public Safety’s commissioner of the law enforcement division position held by former FBI agent Greg Baker.  DPS Secretary Frank Perry — from what sources close to the situation tell me — was not thrilled with that move.

oner for the department’s administrative division, and to Lorrie Dollar, the department’s chief operating officer.  My sources tell me their job responsibilities have been handed over to Baker.

For those who don’t know — Lorrie Dollar is the wife of state Rep.. Nelson Dollar (R-Wake), chairman of the House Appropriations Committee.  He’s also one of the closest allies to House Speaker Tim Moore.

As you’d expect, House leadership is not pleased with Perry’s move. There has reportedly been a flurry of communication about this matter between certain offices on Jones Street and the governor’s office.   Says one of my sources:

“You have to give McCrory credit.  Frank [Perry] told the legislators ‘you might be able to fund my agency and set rules for running it, but you’re not going to tell me who I run it with.’  And Pat has stood by him on it.  He’s told those guys that personnel matters are in the purview of the secretary.”