The Haymaker is EVERYWHERE, folks.  I mean: EVERYWHERE.    I was contacted yesterday by a very plugged-in source from our nation’s capital.  This source was expressing some interest in our item about state Rep.Jason Saine and his big-spending re-election campaign in an off-year.

Many of the biggest expenses charged to the campaign appeared to be in San Diego, CA and Scottsdale, AZ right about the time meetings of the American Legislative Exchange Council (ALEC) were taking place.   There was a meeting in San Diego in July 2015 and in Scottsdale in December.  The Saine campaign was charged for airline tickets, in-flight wi-fi, in-flight snacks,  baggage fees, hotels, and meals apparently related to those ALEC meetings.

My source found that unusual — since ALEC regularly reimburses legislators attending their conferences for “qualifying costs” which include things like travel and lodging.  In fact, it’s stated here on one of ALEC’s 990 forms submitted to the IRS: 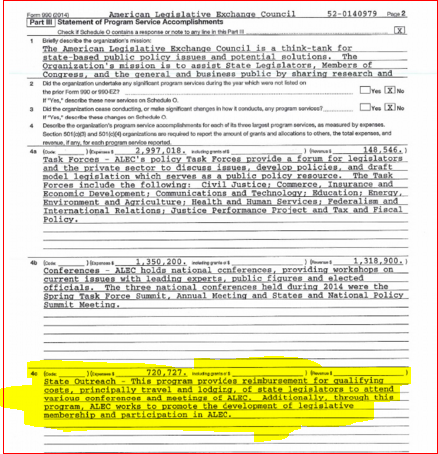 In fact, ALEC makes THIS NICE FORM available to legislators to fill out in order to obtain reimbursement.

Sooooo — did Mr. Saine forego reimbursement from ALEC of his expenses for the conference to, instead, have his campaign fund — filled with cash from lobbyists and others with business before the House — pick up the tab?   Or is this a case of double-dipping — reimbursement from the campaign AND ALEC?