Here’s the announcement from the Mecklenburg County GOP’s Facebook page: 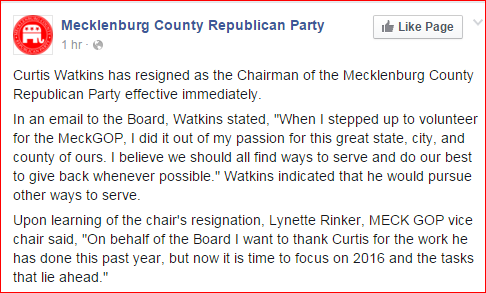 From what I understand, there are nine legislative races and some county commissioner seats in that county that are currently unchallenged by the GOP.  Sounds like there hasn’t been much constructive work going on.

For those who may not have been following along — Watkins got busted trying to recruit an opponent for House majority leader Mike Hager.  Hager called him out on it, and asked for a state GOP probe into Watkins’s actions.  We learned that Watkins, in addition to being a local party chairman, also has a financial stake in the solar energy industry that (in contradiction of the NCGOP platform)  is desperately trying to sink its claws deeper into taxpayer pockets.

We also learned that senator Bob Rucho has called for a local and state probe into Watkins.  And we found out that, after all that, Watkins (1) still thinks Hager needs to lose his reelection bid, and (2) is considering a run for the senate seat being vacated by Rucho.