I guess it was too much to expect the NCGOPe to stand strong for an embattled conservative member of their party.  (Or even to fight for clean elections.  Or defend one of their former House colleagues who lost reelection under shady circumstances.)

We told you about a call from a conservative activist group to delay the seating of state Rep.-elect Rachel Hunt (D-Mecklenburg) due to the discovery of some credible evidence of vote fraud in Mecklenburg County.  Some say more credible than that which caused the Ninth Congressional District seat to be denied certification.

Comments from House Majority Leader John Bell gave the appearance that House leadership might take the complaint seriously in today’s opening session of The General Assembly.   We can all hope and dream can’t we? 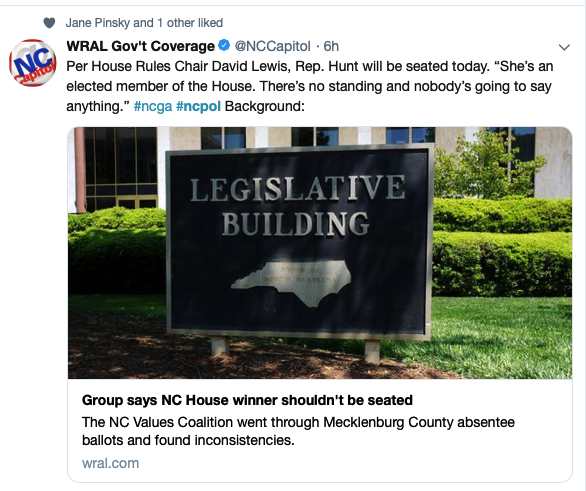 I can imagine that House probes make Lewis uncomfortable.  Say, what ever happened to that pay-to-play allegation sent to the Ethics Committee in 2015?

No standing? The  majority leader seemed to believe this was doable.

Where else could the complainants go?  The state board of elections is dissolved.

Speaker Timmy is another guy who likely gets queasy over the very thought of another investigation.  (He has a few going on his life right now.  Maybe MORE to come.)

One thought on “#ncga: (*CHOKE!*) Folding like one of Jason Saine’s suits.”