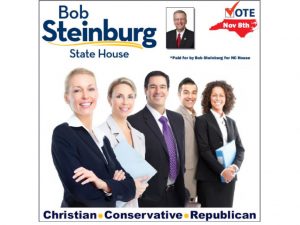 State Rep. Bob Steinburg is seeking the GOP nomination for the soon-to-be-open NC Senate District 1 seat.  A video has gone up on YouTube depicting this self-proclaimed “Christian” and “champion of family values” leaving an angry profanity-laced voice mail that is (a) definitely not suitable for work and (b) definitely not the kind of thing you want gracing the ears of your kids.  (I count at least TWO of George Carlin’s legendary ”Seven Dirty Words.”)
Click on the link and watch / listen at your own peril.  Don’t say I didn’t warn you.

One of the things Steinburg mentions on the video is some grief he’s getting over “attendance.”  According to official General Assembly records, Steinburg has the worst attendance record in the House for the 2017-2018 session. Less than a handful of members, who either resigned during the session or were appointed to the House mid-session, had worse showings than Steinburg.