WRAL’s Binky — that mouth-breathing buffoon who serves as first mate on the S.S. Short Bus — is giving Colin Campbell and Rob Christensen a run for their money in the ‘laziest driveby PoS competition.’ 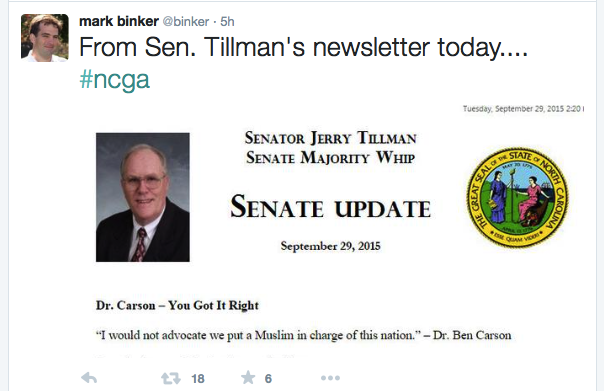 Now, for the record, we personally like Jerry Tillman. We have some issues with some 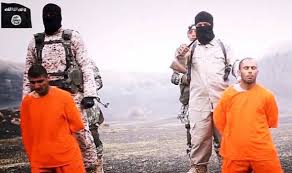 decisions he’s made recently.  (Inattention to Moore County, solar incentives, gas tax increases, affiliated committees, and some other things that will likely earn him a serious primary challenge in March.)

But suggesting he’s a bigot is a really shameful piece of reaching.

It’s interesting that the very same driveby d-bags who quake with fear over the thought of Mark Harris, Larry Pittman, Pat Robertson, or Mike Huckabee serving in political office will jump all over ANYONE seen as disrespecting Islam.

A Tweet like this by a journalist in an Islamic country against one of that country’s leaders is likely to result in a visit from the ‘Allah Akbar’ boys, armed with knives, in search of a limb to amputate.
“Mainstream” Islam demands women cover up their heads in public and bans them from driving.  Women voting and holding office is frowned upon.  A woman who has an affair can be stoned or have a limb amputated. 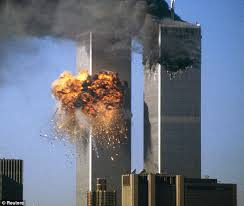 Sharia law and quite a bit of Islamic teachings are incompatible with The Constitution.  These people are devoted to a lot of Dark Ages type practices that typically horrify lefties.

Drivebys spend a lot of time demanding white conservative Southerners atone for racist acts committed 50-200 years ago.  In light of that fact, it’s only fair that we demand Muslims in this country stand up and speak out against the thugs and barbarians acting in the name of their religion.

I don’t know of many — if any — Christian churches where pastors are calling for holy war against “non-believers.”

There are a lot of things Binky COULD be talking about on Jones Street.  He is simply planting a seed — with this tweet — to, hopefully, encourage public outrage over senator Tillman’s “racism.”

Islam is much more of a political movement than the Jewish or Christian faiths.  A theocracy — based on ANY faith out there — is undesirable and antithetical to the principles of freedom and liberty.  There is nothing wrong with what Ben Carson or Jerry Tillman said.

Islam is a threat to our country, our way of life, and the continuation of Western civilization. Binky and the rest of his dopey friends need to do a better job of respecting The First Amendment and stop playing stupid games like this.