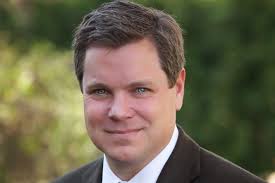 Hosannas and Hallelujahs, brothers and sisters. Paul Tine is now unaffiliated. UN-A-FFIL-I-ATED.   Rest easy. Sleep well. Go on about your business. He’s courageously gone off all by himself (favoring ObamaCare, opposing school choice, but caucusing with the GOP).

Tine, from Dare County, won reelection to the state House as a Democrat against a Republican candidate in November.  Republicans are cheering this development as a blow to the Democrats.  But check out this info from PoliticsNC, a Democrat-oriented site:

The legislature is back in session and Rep. Paul Tine is in the spotlight. Tine, who was just re-elected as Democrat is switching his party registration to Independent and caucusing with Republicans. According to the News & Observer, Tine said he left because he’s a fiscal conservative who has become disenchanted with his party and believes he can ‘get more done’ by joining Republicans.”

Well, that’s not what he told his former Democratic colleagues in an email after the November election. He criticized the Republicans for “egregious actions” and called on his then-fellow Democrats to become “the party with the answers.” Doesn’t sound like he was too enamored with the GOP two months ago.

In his email, Tine was clearly upset with the House leadership and wanted changes. He believed that the caucus needed to give more influence to moderates. He also wanted leadership to be “restructured” so at least one position, Deputy Minority Leader, was not elected, but appointed. And he wanted staff changes. It seems he left because he didn’t get his way.

Tine’s complaints were more about process than ideology. Now, he’s thrown his lot with people with whom he has little in common ideologically. Republican policies caused a hospital in his district to close and Tine has said he supports Medicaid expansion, something incoming Republican Speaker Tim Moore opposes. Two counties in his district also had among the highest teacher turnover rates.

As an independent in a caucus that already has a veto-proof majority, Tine has little to offer the Republicans other than to insult the Democrats. He will probably have less influence on Republicans than he did with Democrats and, unless he changes his positions, he will agree with them less. With shrinking revenues and anti-government majority, there won’t be many spoils for his district, either. […]

It’s interesting that he took so long to switch.  Tine announced his decision the first week of January.  The party switch was first reflected in board of elections records TODAY.  Here are a few comments from Mattie Lawson, the GOPer who lost a close race to Tine in 2012 and again in 2014:

This move was a surprise to me as Tine’s opponent in 2012 and 2014. I am very interested in this change because if Tine had run as a Unaffiliated (as he claims is more closely aligned with his beliefs) I would be the District’s current House Representative. And the NC Republican House Caucus would have had an actual Republican in it’s ranks rather than making room for a liberal Unaffiliated who will just muddy the waters.

My supporters and I worked hard and lost against a super well-funded Democrat and voters cast ballots for someone who wasn’t really what he said he was. Politics aren’t fair. It’s hard to make this look like anything but an opportunity for Tine to use donors and use the political system to gain power for himself. Hopefully, this will somehow bode well for District 6 in the end.

Although Tine didn’t beat the Democrat drum as much as I’ve heard other politicians during the campaigns, I found his ideas leaned far left: the answers to our problems are more government involvement.

Politically, he made a smart move as someone who wants to be a mover and shaker, which he clearly does. Getting into the Republican Caucus won’t hurt him though I fail to see how it helps the Republicans who don’t need his vote and will find he doesn’t help bolster conservative ideas of less government involvement in our daily lives. Look at this voting record in the past. Civitas gave him an “F” rating for good reason.

In making this announcement Tine claimed he wasn’t free to vote as he chose as a Democrat. That’s quite a condemning statement on Democrats. Maybe his most significant contribution to his home District might have been to remain a Democrat so he could reform it from the inside allowing politicians to vote their conscience rather than follow lock-step in line with the party. 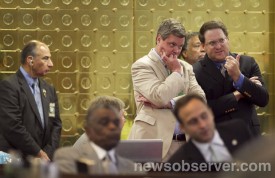 He voted against keeping Sharia Law out of NC courtrooms. His position on Common Core has him aligned with the NC Department of Instruction rather than with parents. He can’t run from the $2000 he gave from his personal resources to elect 0bama.

I imagine the NC and outside NC Dems that gave him thousands and thousands of dollars to beat me twice are not happy right now.

Bottom line: I’m glad he did it and am not disappointed he didn’t switch to Republican because he kept some credibility.

It will be interesting to see what legislation he sponsors and who the “Dare Care” Dems will find to run against him in 2016. Becoming unaffiliated makes him more beatable by a hard-hitting Republican candidate regardless of which race he tackles next.

Keep on eye on his voting record. Talk is cheap. Action is what matters.

Just like Edgar Starnes, Tine is showing some disrespect to his voters.  Both Phil Gramm (R-TX) and Strom Thurmond (R-SC) resigned their seats in Congress and ran in (and won) special elections for the seats they resigned.  Tine SHOULD step down and run in a special election as an unaffiliated candidate.  There are likely a lot of people who gave him money and votes BECAUSE he was a Democrat.

3 thoughts on “#ncga: All by himself”