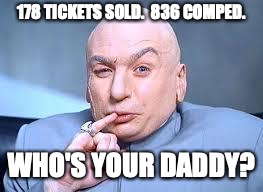 venture into basketball tournament marketing.  We’ve kept you posted on how it’s been going.  Though, it is interesting how the senator-elect and his company are stone-cold quiet about how the tournament went and what, if any, benefits Currituck County taxpayers got out of it.

The final numbers are in.  According to the Asheville arena management, a total of 178 tickets were sold for the three day event.  A total of 836 tickets were “comped” — given away for FREE.

Mind you, those figures apply to an arena that seats more than 7000 people for basketball.

As far as media coverage goes, the only press passes sought by Steinburg’s company were for a three person crew from WLOS — the local Asheville TV station. That appears to be  IT.  (We reported before that the only radio station hosting play-by-play in North Carolina was in the Wilmington area.)  No cable sports outlet showed interest in broadcasting the event.  ESPN didn’t apparently see it worthy of its internet-only streaming ESPN+ subscription service.

Oh, and just for a few extra giggles — it appears the logo Steinburg had installed at center court, bearing the visitcurrituckobx.com logo, damaged the Asheville arena’s floor.  Arena management has assessed Steinburg’s company $2000 for those repairs.