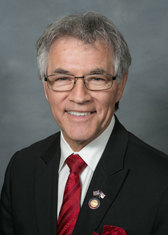 The family feud that has been simmering under the radar appears to have bubbled to the surface.  As the dust clears from Tuesday’s vote, a conservative-led coalition of House Republicans is launching a challenge to the reelection of Speaker Tim Moore.

State Rep. Harry Warren (R) of Rowan County has officially thrown his hat into the ring for the speaker’s job in the upcoming session.  Warren announced his intentions in this letter sent to his GOP colleagues.

Warren has earned the ire of some conservatives for his past stances on immigration.  Sources close to this move against Moore tell me Warren has ”seen the light” on immigration and amnesty issues.

Here are some of the highights from Warren’s announcement:

Fellow Caucus Members,
We have arrived at a historic crossroads in our state. In spite of media assertions to the contrary, our state overwhelmingly voted for Donald Trump, the ultimate outsider, to “drain the swamp” that DC has become.
This election was an utter repudiation of establishment leadership.  It was a rejection of “business as usual.” It is absolutely clear that it was about beginning anew.
While we preserved our super majority, in great part due to the Trump Train, there are facts that are worth bearing in mind as we move forward.
We have passed many great reforms since 2011 and have clearly established the effectiveness of Republican policies. However, we have repeatedly failed to control the narrative in the public domain, giving the liberal Democrats the latitude to unleash their negative messaging for public consumption, which consistently put us on the defense about great legislation.

To make matters worse, actions of some of our own members have seriously offended our base with questionable, if not unethical, behavior, mirroring that of the Democrats we replaced. Inappropriate relationships with lobbyists and/or staff; tapping campaign funds for personal use; the strong appearance of pay for play activity; and engaging in business contracts that reflect an obvious conflict of interest, all served to give our base – indeed, the public in general – the impression that the Republicans are no different than the Democrats.

Weakening the trust of our base is devastating and will cost us their dedication and support. It enables our adversaries to more easily undermine us, discouraging our voters and our contributors. Allowing this kind of misconduct, especially among leadership, is among the chief reasons the Democrats lost their legislative majority.

If we are going to retain the trust of leadership from our constituents and instill confidence in their government, we must change the way we conduct ourselves as a body, both publicly and privately. We must continue to promote conservative policies while we demonstrate Republican values in the way we conduct and present ourselves and our legislation. The divisiveness and discord within our own caucus must end – now.

I ask you to consider the past two years of turmoil and conflict within our caucus the policy and budget disagreements and the embarrassments of one expose’ after another. The ramifications from failing to think legislation through caused unforeseen consequences that have been costly to us.  Two examples are the Judicial Retention idea that likely cost us the Supreme Court, and HB 2, which could have been unnecessary had we passed prohibitive legislation prior to adjournment, preempting rather than warning Charlotte not to pass the ordinance.
We cannot endure another two-year term marred by discord and vindictiveness, cronyism and petty politics within our caucus, or with our leadership.
We must go forward, unified in our goal to retain control of the state for the promotion of Republican values and conservative policies that will ensure a promising future for our children and the state. The Speaker of the House should collaborate with the caucus to develop and promote a shared vision for where we want to go and how we will get there.
We still have much to accomplish legislatively. We have much more to do to rebuild the trust a

nd support of our constituents. We have been given another opportunity to demonstrate a higher standard. We must seize it.
The entrenchment of leadership that lead to the sort of self-enriching insider politics that corrupted Washington, DC, has also infected our General Assembly (see Marc Basnight – Jim Black, Richard Morgan, et. al.) One sure way to rectify that is the clear rotation of leadership.
Some among us have floated the idea of term limits for members and / or terms of service for leadership. In fact, last session we had several such bills filed.

It is time for a clean slate; we cannot afford to be distracted by poor leadership, infighting, ethical questions and conflicts of interest.  We have an obligation to step above it, take those issues off the table, and focus on the issues that affect every family in North Carolina.
Today I announce my candidacy for Speaker of the House.

Sources tell me that a Warren speakership would in all likelihood mean a diminished amount of influence in the House for Moore lieutenants Nelson Dollar and David Lewis.

Oh, and there IS a platform for the Warren campaign:

Civitas ranked Warren with a conservative score of 71.4% for 2016 — not great but about 20 points higher than Moore. The American Conservative Union has Warren ranked with a lifetime rating of 92%.  (He scored an 83% rating in 2015.)

9 thoughts on “#ncga: A race for speaker”