He’s played games with his campaign fund — paying himself, paying family.  He’s taken a walk on key votes in the House.  He’s hung so close to leadership (i.e., Speaker Timmy) that he has a permanent brown stain on his nose.  His unfiltered Facebook commentary has provided plenty of comedy that I am sure he did not intend.  (He’s publicly inquired and speculated about buying a new car with those lobbyist-supplied campaign funds.)   Now, it looks like Kelly Hastings has a spirited primary challenger.

Charlene High, a former teacher and counselor, has stepped up to take on the veteran legislator.  She’s adopting a lot of the anti- “career politician” and “drain the swamp” rhetoric that appeals to so many.  I find her “Core Four” decision-making framework especially interesting:

1. Does this legislation match up with my Christian values? 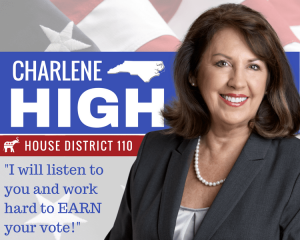 So, folks in Cleveland and Gaston counties no longer have to settle in the NC House race.  You have a choice this year.

2 thoughts on “#ncga: A primary for Kelly Hastings”