and cyberspace to hug up tight to President Trump and question the conservative credentials of incumbent Walter Jones (who, by the way, is regularly ranked as one of the North Carolina delegation’s most conservative members).

Jones has countered with a couple of ads of his own.  Here’s one:

Listening to lobbyist Scott Dacey brag about being on the Trump Train made me do some checking as to exactly when he got on board.

There’s lobbyist Scott Dacey, bragging about being in Paul Ryan’s private suite at the Republican National Convention, but no mention of Donald Trump.

How about after the election?  Still not even a word of Donald Trump.

How about the Inauguration?  Still no congratulations to President Trump. 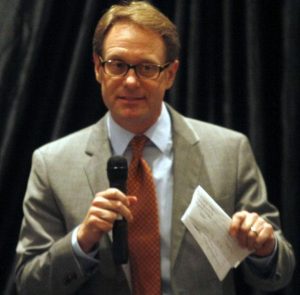 You have to go to June of 2017  to see Scott Dacey’s first mention of Donald Trump, a few days before Dacey announced he was running for Congress.

Scott Dacey is a career Washington lobbyist for Indian casinos.  He’s spent over 170 thousand dollars of his own money funding the establishment, both Democrats and Republicans.

Scott Dacey wrote the checks to finance the politicians who built the swamp President Trump is trying to drain.

So remember, lobbyist Scott Dacey isn’t on the Trump Train, he just jumped on the bandwagon.

Oh, and here’s another:

Congressional candidate  and lobbyist Scott Dacey says he’s on the Trump Train, but he’s just jumped on the bandwagon, hoping to use the President to fool voters.

The fact is lobbyist Scott Dacey has never given a dime to Donald Trump, but he’s given over 170 thousand dollars to support the builders of the swamp.

In fact, his list of contributions to the establishment, both democrats and republicans, is so lengthy, we’ve had to hire an auctioneer to run through it.

So when you hear Scott Dacey say he’s on the Trump Train, just remember that he’s just a Washington  lobbyist who’s jumped on the bandwagon.

2 thoughts on “NC-03: Dacey takes a seat on the bandwagon”