In their lust to just make the whole NC-09 kerfuffle GO AWAY, Raleigh Republicans are passing legislation of questionable constitutionality and embracing the reporting of the driveby media.

Never before has the lack of leadership in the NCGOP been so apparent.  You’ve got hundreds of egos running around, running their mouths.  Meanwhile, in the Ninth District, reputations are being destroyed, the will of the people is being ignored, and the state’s congressional delegation is left in limbo.

[…] Under current state law, if the board calls for a new election it would be a re-do of the general election

contest between Harris, McCready and Libertarian Jeff Scott. But the Republican-led General Assembly passed a bill Thursday mandating a new primary election in the district if the board calls for a new election. The bill must be signed by Gov. Roy Cooper, a Democrat.

“These bad actors may have been even more influential in the primary of 2018 than they were in the general election,” Rep. David Lewis, a Republican, told The News & Observer.[…]

And WHERE is that evidence?

Assertions like that are a legal problem, because the primary has already been certified. Calling for a new primary flies in the face of the state constitution.  It’s a wee bit hypocritical to trumpet the sanctity of the constitution  and the will of the people in defending voter ID, and then turn around and advocate a move like this.

Why can’t these people buckle down, demand the lefties PROVE IT, and demand that the guy who won the race and accepted the concession of his opponent be seated?

Why not at least wait until a serious investigation is completed?  It’s as though some folks in Raleigh are very nervous about the thought of a new wave of subpoenas, depositions, and hearings.

[…] “It certainly looks like we’re heading toward a new election,” said Bill D’Elia, a spokesman for Senate Leader Phil Berger: “ Media reports also indicate potential wrongdoing in the primary, which is why we passed a bill earlier this week to require new primary if the Board calls for a new election.”[…]

So, you’re now basing your decisions on the work of the same driveby media that LIES about just about everything  you guys do up there on Jones Street?  These are the same people who tried to tell you that you’re starving public schools, and that HB2 will mean checking under skirts before allowing admission to ladies restrooms.

In reality, this is about a bunch of establishment Republicans angry about their buddy Robert Pittenger going down in the primary.  They don’t like Mark Harris, and see the current brouhaha as a great way to, um, “correct” the voters’ “mistake.”

“Media Reports” indicate that ballot problems in Columbus County (next door to Bladen) were worse than what allegedly happened in Bladen County.  But we’re not talking about re-doing that race.  The Republican there won big.  The focus on the Ninth indicates that the concern is more about jockeying on both sides to change the results of a close race than about the integrity of our election system.

[…] Wake County’s investigation, which began in January, includes the 2016 election, District Attorney Lorrin Freeman told The News & Obsever on Friday. She said the investigation could extend for several months.

“The focus includes not only what was the nature of voting irregularities of absentee ballots, but also in as much as there may be activity, how would it have been funded and who would’ve been involved in such a scheme — including potentially campaigns and others who may have had an interest in such activity,” Freeman said.[…]

Lorrin Freeman is the daughter of Jim Hunt consigliere Franklin Freeman.  So, you know what kind of influences she has bearing down on her. 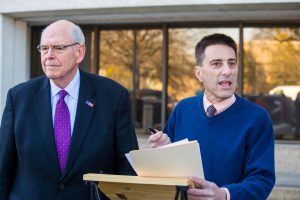 This stuff they’re talking about didn’t just bloom in November 2018.  It’s been happening for decades. And it has blossomed and prospered mostly on the Democrat side.  But the Democrats and the media only want to talk about Bladen County because the accused worked for Republicans.

Sleazy politicos have been taking advantage of poor, disabled, and lesser-educated voters for aeons.  It’s been less about the democratic process and more about herding people around like cattle to satisfy the wishes of big-money political bosses.

This is NOT what The American Revolution and The Civil Rights Movement were about.