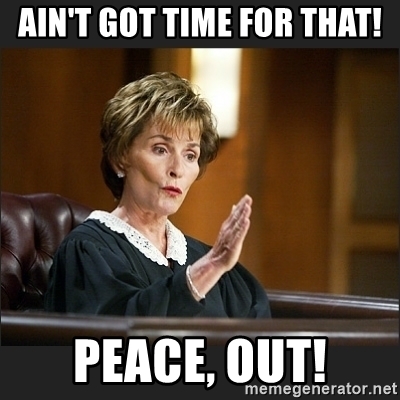 The drivebys are painting Judge Ridgeway’s refusal to force certification of the Ninth Congressional District race as a defeat for Mark Harris.  Actually, if you read into the judge’s actions and comments, he took every opportunity to get himself out of and away from this very politically-uncomfortable situation:

[…] “This is an extremely unusual situation, with no board in place, and asking this court to step in and exert extraordinary power in declaring the winner of an election, when that is clearly the purview of another branch of government,” he said during the hearing.[…]

Ridgeway, a Democrat, also urged the attorneys from the very beginning to speed things up because he had places to be: 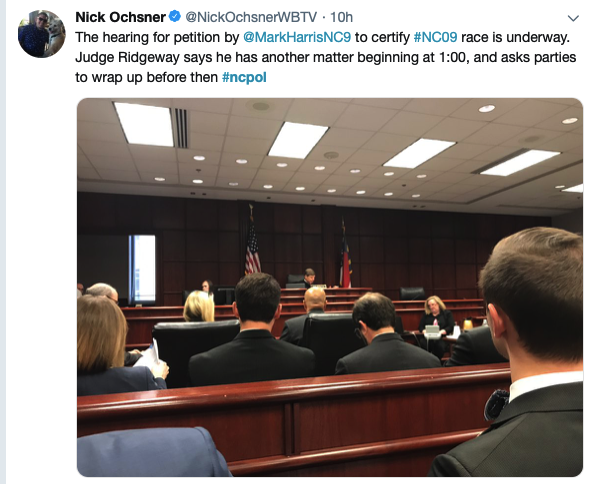 At least one driveby offered up a Freudian slip that likely shines a light on his and his driveby colleagues’s sentiments about this whole matter:

I thought this was all about “election integrity,”  and NOT Mark Harris.  (Maybe it really is a game of ‘Get The Preacher.’  Who knows?)

There is a lot of blame to go around for this debacle.  The Republicans in the General Assembly had NO BUSINESS screwing around with the board of elections in the first place.  The GOP also regularly loaded up the board with go-along, get-along Republicans while Democrats regularly put up street fighters like Josh Malcolm and Larry Leake.  Even in the minority, Malcolm managed to run over Republicans.

If Democrats really want to play the election integrity game, I say the GOP should gladly join in.  Democrats are trying to condemn Mark Harris for something they do ALL THE TIME.

Make sure there is a thorough probe of on-the-ground, in-the-field shenanigans in every county in the district.  (For starters,  Josh Malcolm doesn’t need to be anywhere near an investigation into this election.  His daughter was a paid employee of the state Democrat Party and the McCready campaign in November. )

Bladen County is small.  The county, as a whole, has fewer residents than the state Libertarian Party has members.  In 2018, there were 12,510 registered voters in the whole county.

Only half of Bladen is in the Ninth District.  If you were going to cheat in the congressional race, you don’t have a whole lot of room to operate.

Next-door Robeson County, on the other hand, is a different story.  It had 48,606 registered voters in 2018.  The whole county is in the congressional district.  It is also  a Democrat stronghold with a long, long, long history of election hijinks and malfeasance.   We’ve already confirmed that Robeson County had TEN TIMES  the amount of shenanigans Bladen County is accused of having.  (And we’ve just scratched the surface.)

But the media and the Democrats don’t want to talk about Robeson County.  Any illegalities found there will be Democrat illegalities.  (At least the overwhelming majority will be.  And THAT would be inconvenient to the narrative currently being spun.)