They had a high-profile show trial that saw Rev. Mark Harris personally ruined.  McCrae Dowless got indicted and arrested.  And Ginger McCready’s political fortunes got revived as authorities reversed his November 2018 905-vote defeat.  And the driveby media dutifully took dictation and regurgitated slander and misinformation.

It now appears that, after all that devastation and destruction, authorities are backing off what they’ve done and saying “Oh, never mind.”

How do you sleep at night after wreaking all this havoc, and simply walking away from the scene?

But HERE was the bigger news:

And the EVEN BIGGER news, in the form of  a release from the Wake prosecutor’s office: 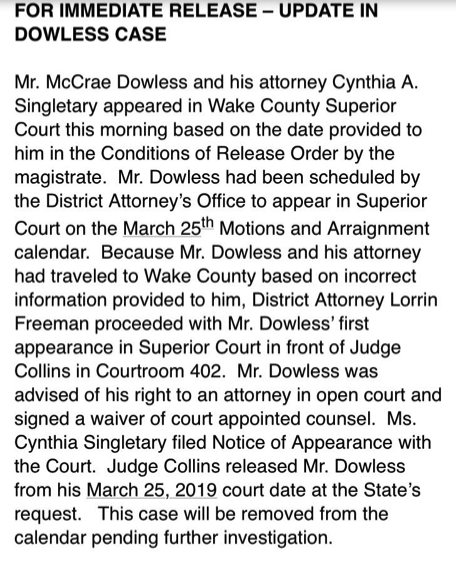 Check out that last sentence in the release:  “This case will be removed from the calendar pending further investigation.”

What does that mean?  I talked with a very wise legal eagle who regularly educates us here at TDH with all kinds of top-notch legal knowledge:

“It tells me one of two things.  Either they want to go take this in front of the grand jury.  Or they’ve realized they have a mess on their hands and want to tuck this one away and run out the clock.  Just hope it will go away quietly and everyone will forget about it.”

Dowless has already been indicted.  So why would you need to take the whole thing BACK to a grand jury? The second option our legal eagle mentioned sounds more and more likely.

A lot of folks on the Democrat side DO NOT want McCrae Dowless to go in front of a jury.  That experience could blow up in a lot of powerful people’s faces, and likely blow up a system that has been a surefire winner for Democrats for decades.

What a lot of people don’t want you to know:  In North Carolina, if you basically hold your mouth right and say the right things, ballot harvesting is perfectly legal.

Democrats have slapped the bejeezus out of Republicans with it for decades, and are planning to do it again in 2020.  Their own game plan got used against them successfully in 2018, and they wanted retribution.

Indicting, and THEN investigating?  What kind of justice is THAT?

There are boatloads of evidence in Robeson and Bladen County showing paid Democrat operatives doing TEN TIMES worse than anything Dowless may have done.  But state and county election authorities ignored it.

Their mission was to take out Mark Harris and McCrae Dowless and allow the stealing of  a congressional election.  (The GOP establishment didn’t like Mark Harris, so they sat on their hands and let the Democrats work their black magic.)  And they’ve nearly gotten away with it.

The question is:  Will the law-abiding people of North Carolina allow them to get away with all this?

Let’s  make sure McCrae Dowless gets his day in court.  Then we can sit back and watch some powerful political heads roll and explode.