We’ve heard all kinds of coverage of this Syria refugee bill pushed through the Congress in response to the Paris terror attacks.  We heard about 47 Democrats joining the Republican majority, while TWO Republicans voted NO.  Who were the two?  Steve King of Iowa and Walter Jones of North Carolina. 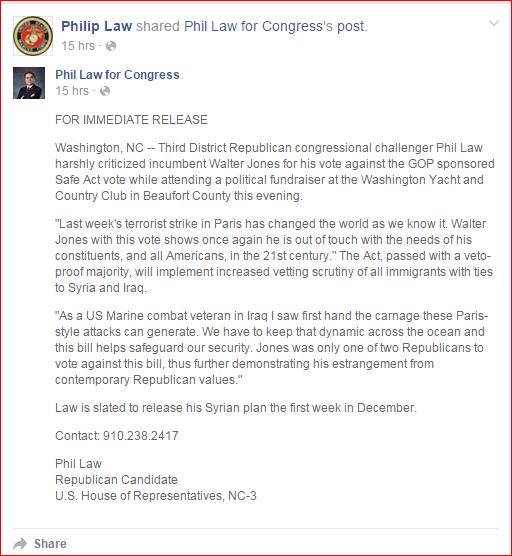 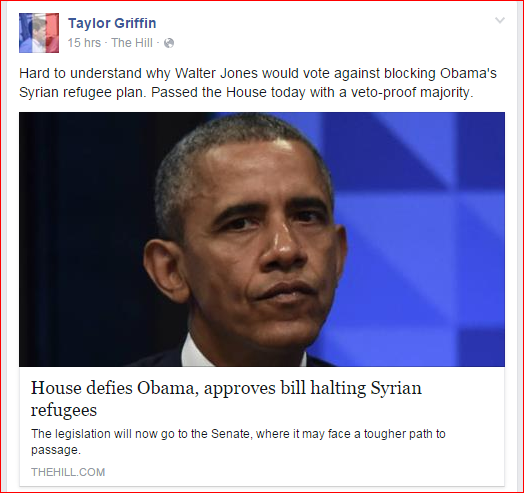 Have Jones and King gone over to The Dark Side ????  According to Glenn Beck’s The Blaze — one of the few media outlets who bothered to dig deeper — the answer is NO:

Only two House Republicans voted against the bill to strengthen the vetting process for Syrian refuges whom President Barack Obama wants to bring into the country. The “no” votes came, at least in part, because the bill failed to create safe zones within Syria.

Republican Reps. Steve King of Iowa and Walter Jones of North Carolina opposed the measure that passed the House with a veto-proof 289-137, including 47 Democrats, and now heads to the Senate.

“I voted against the American SAFE Act because it fails to restore Congress’ Article 1 authority over admissions of migrants to the United States,” King said in a statement provided to TheBlaze.

“How can we trust this Obama Administration who will not utter the words ‘radical Islamic jihad’ to accurately screen Syrian and Iraqi refugees as required in this bill?” King continued. “For that reason, I submitted an amendment to Rules, which was ultimately not adopted, that would create international safe zones for refugees in their homeland. The safety and security of the American people is paramount. I respect the House trying to find a solution, but I do not believe this was the right or strong enough one.”

The White House has promised to veto the measure.

Jones said the bill was not acceptable because it contained language to fund the president’s plan for importation of refugees.

“Defunding President Obama’s refugee program is the only way to ensure there is an actual halt to a refugee influx until we can determine without question that we are not giving terrorists a free pass into the United States,” Jones said in a statement.

“Congress can defund the program in the appropriations bill, which will come to the floor in early December,” Jones continued. “To ensure our safety, Congress must seize that opportunity and use its constitutional power of the purse. Short of that, even if today’s bill were to pass the Congress and be signed into law, the president would still retain the power to let in whoever, and however many, refugees he pleases. And given the president’s unwavering support for open borders, unchecked illegal immigration, and mass importation of foreign refugees, we know he can’t be trusted with that authority.”