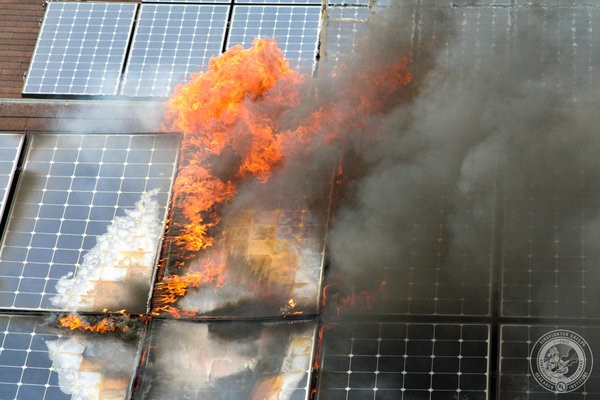 I bet that headline got the attention of all you solar cash-whores on Jones Street.  (And there ARE a lot of you!).  Read THIS and weep :

Wind and solar are often touted as “clean” sources of energy, but the evidence showing that this simply isn’t true is mounting. From large landfills used to dispose of the (non-recyclable) blades of wind turbines, to toxic chemicals used to make solar panels, to fears about wind companies abandoning their wind turbines after they are no longer useful, the “green” veneer is fading.

Now, it appears there is hard data clearly demonstrating that solar power is contributing to higher levels of air pollution in North Carolina, which has the second-most solar of any state in the country.

This probably sounds counter-intuitive at first, but after further investigation in makes sense. Solar power ramps up and down based on the sun, as a result, natural gas plants need to ramp their output up and down to make sure the grid isn’t overloaded.

Adding solar to the grid is like forcing a car to drive in town with the constant start and stop of traffic instead of allowing it to drive in cruise control on the highway.[…]

And HERE’S more from  earlier this month in The North State Journal:

A seven-month investigation and numerous public information requests have revealed the move to increase solar power might be leading to an increase in the very emissions alternative energy sources aim to reduce.

Crawford provided measurements showing that even on sunny days — when solar power is at its maximum output — more NOx pollution is released into the air than would occur if no solar electricity were used and natural gas were used instead.

That’s because traditional power plants — including cleaner burning natural gas plants — must scale back electric generation to accommodate solar energy surging onto the system when the sun rises, and power back up when the sun sets and solar energy dissipates. That starting and stopping reduces efficiency and incapacitates emission control devices, increasing pollutant levels.

On other days solar energy is erratic and can result in more frequent cycling of reserve sources, further decreasing power plant efficiency. This increased cycling can result in increased emissions and undue wear and tear on the expensive equipment.

Duke’s data create new questions for policymakers and regulators in North Carolina. The state had 4,491 megawatts (MWs) of installed solar capacity in the second quarter of 2018, second only to California. Under current law, that is expected to jump to 6,800 MW by 2025 in Duke Energy’s Carolinas and Progress regions.

“After committing $2 billion in tax credits, and more than $1 billion in electricity overpayments for solar power, we now learn from Duke that nitrogen oxides have actually increased, and that CO2 may be headed in the wrong direction,” said Donald van der Vaart, former secretary of the N.C. Department of Environmental Quality and State Energy Policy Advisor in the McCrory administration.

“This should shock everyone responsible for North Carolina’s air quality, and the nation’s energy policy,” van der Vaart said.

“This issue deserves a re-look, and it needs to be done fast,” Dan Kish, distinguished senior fellow at the Institute for Energy Research, said after reviewing Duke’s data.

“It’s great for the Wall Street financiers, and those in it to make a fast buck while the sun shines, but it’s leaving us with an increasingly unstable grid and externalities such as more pollution,” Kish said. “The regulators have to remember that their job is to make sure that quick buck artists don’t pick the pockets of consumers and leave them with a weaker, less resilient grid.”

Steve Goreham, a policy advisor to the Heartland Institute who writes and lectures on energy, climate, and pollution, thinks Duke’s evidence bears deeper scrutiny by policymakers. It is the first instance he is aware of in which a utility revealed internal data showing solar energy increases harmful emissions from gas-fired backup generators.

“Typically this kind of stuff doesn’t go public,” Goreham said. “It’s hard to get data on this.”

Goreham said studies in Colorado and The Netherlands concluded that adding wind power to the electric grid increased CO2 emissions. He and Kish said it makes sense those same principles would apply to solar energy.

Not everyone agrees. A 2013 report by the National Renewable Energy Laboratory and other researchers concluded CO2 emissions are negligible when wind and solar are added to the electric grid. NOx emissions might be reduced slightly more than expected, but sulfur dioxide pollutants could increase.

That study relied on computer simulations and hypothetical scenarios, while Duke’s numbers are based on recorded data from full-scale operations.

Duke is attempting to mitigate the situation. In response to public records requests, DEQ released documents showing Duke is seeking revisions to its air quality permits. Duke wants regulators to relax restrictions at several of its power plants to handle the surge of solar growth.

It’s unclear how long the state Department of Environmental Quality has known about the solar-linked pollution, why it’s been allowed to persist, and why lawmakers and the public have not been informed solar energy increases NOx emissions. DEQ spokeswoman Sharon Martin said it would be premature to comment while Duke’s applications are under review.

Utility officials pitched the plan to state environmental regulators at an Aug. 23, 2018, preapplication meeting. Crawford said Duke filed formal applications on March 26 of this year. Despite repeat inquiries about the status of the applications, DEQ did not provide copies until June.

Under its current permits in the heavily regulated market, Duke must completely shut down the backup combustion turbines when solar peaks under a full sun, then restart them when the sun recedes.

Duke wants DEQ to issue new permits allowing combustion turbines to throttle up and down from a “low load” idling operation instead of switching completely off and on as solar waxes and wanes. In its permit applications Duke said that would lower pollutant emissions and reduce stress on equipment.

In a series of e-mail exchanges for this article, Crawford provided information from a team of Duke subject matter experts confirming NOx emissions would be lower if there were no solar power on the electric grid.

Without any solar power in the mix, “a typical combined cycle combustion turbine emits NOx at approximately 9-11 lb/hr, assuming 24 hours of ‘normal’ operation,” Crawford said. That is equivalent to 264 pounds of NOx emissions daily. When those same plants are operated to supplement solar power facilities, daily emissions more than double to 624 pounds a day, based on a table in Duke’s application.

If DEQ agrees to Duke’s alternative operating scenario, a combustion turbine would emit 381 pounds of NOx daily — still 44% more pollution than operating without any solar power on the grid.

“In seeking to amend their permits, Duke is doing the best they can given the solar mandates in North Carolina,” Van der Vaart said.

The American Lung Association warns NOx can cause asthma in children and respiratory problems in vulnerable populations. NOx also contributes to the formation of ozone, smog and acid rain.

Nitrogen oxides are one of six pollutants for which national air quality standards under the Clean Air Act were created.

The data on carbon dioxide emissions from Duke is less certain the NOx figures. “We expect a slight increase in CO2 emissions at the plant level from turndown versus shutting down and restarting,” Crawford said.

In general, she said, increasing solar generation tends to decrease CO2 emissions if nuclear generation and other factors remain constant.

“As the amount of solar generation increases, however, this effect will diminish and could reverse at some point due to decreasing room for more efficient generation,” said Crawford. More lower efficiency generators, designed for short cycles, could ultimately be used to provide contingency power for intermittent solar, according to Crawford.

She cited studies that concluded utilities must cut solar power off from the electric grid more frequently as solar production expands. That’s because more electricity is produced than can be used or exported to other states.

North Carolina law does not allow utilities to shut off solar power when it’s not needed, with a few minor exceptions. Crawford said if Duke does not win approval of its permit modifications to allow combustion turbines to idle instead of turning off, the utility is left with only two viable options to deal with growing solar generation.

It could export excess energy to other regions, but transmission capabilities are limited.

Alternatively, Duke could dial down nuclear generation, but doing so would increase CO2 emissions. Crawford said that “it’s possible that nuclear generation could be impacted by solar; however, we cannot say that definitively at this point.”

Kish said if utilities take nuclear plants offline to accommodate solar energy it would reverse previous reductions of CO2 emissions, and wreck the economics of the grid.

“Renewable energy sounds good, but it performs terribly. If you want electricity available when you need it, you don’t want intermittent, unreliable, renewable energy,” Kish said. “It’s like a cancer on an efficient grid, with its ups-and-downs forcing other sources to pick up the slack in the most inefficient ways, which, in some cases, are more polluting.”