A lot of folks have been working very hard to reduce being Republican to little more than having an (R) next to your name on the ballot.   Platform be damned!   We’re seeing it all over the state.  And we’re getting a taste of it here in Moore County.

All three of these folks ARE registered Republican.  But the Pinehurst council / mayor races are non-partisan.  And all three of the endorsed candidates are outspoken proponents of limiting personal property rights, increasing red tape, and empowering bureaucrats.

John Strickland, in his single term on the council,  was best known for being on the wrong end of a lot of 4-1 votes.   During that period where Strickland was voting NO so much,  Pinehurst was busy losing its reputation as a bastion of red tape and unreasonableness.  He even voted NO on expanding the village green — which has paved the way for so many more community events in our historic downtown that desperately needed a life-saving shot in the arm.

Strickland and his followers are also famous for creating crises where they don’t exist.  During his last run for mayor, he declared the village was overrun with deer and we needed hunting INSIDE THE CITY LIMITS.  (You would have likely found yourself dodging more than errant golf shots.)  There was no evidence to support his claim, but it got him some headlines and whipped up a frenzy among potential supporters.

Strickland has also revived his claim that residents are being terrorized by rental properties.  He’s calling for increased regulation on rental property within town.  Never mind that the town attorney told him the state legislature says it can’t happen. And the village’s police chief says his department has seen no evidence of widespread problems with rental property.

Pinehurst IS a tourist destination.  That means tourists come here and rent places a lot.  If tourists renting places really annoys you,  you ought to pack up and move somewhere that does not interest tourists —  like, say,  Robbins.  (Or call your HOA.)

Hogeman and Boesch are both attorneys.  Hogeman says she wants to do for Pinehurst what she did for Greenwich, Connecticut.  And she wants to screen as much stuff as possible from view — especially businesses — with trees.

Boesch is the most palatable of the three.  Granted she is quite wishy-washy and a flip-flopper.  I can remember Lydia fighting tooth-and-nail against Pinehurst’s annexation of Pinewild  Country Club (where she lives).  Now she wants to be on the Pinehurst Village Council.  I’ve seen her quoted agreeing with the idea of further empowering the planning and zoning department, as well as Strickland’s tales about rental property terror.

The probability of Lydia Boesch making the right decision on her own is about 50-50.  But at least you can talk some sense into her.

Who SHOULD you choose on November 5?   Claire Berggren is a former council member and chief of marketing for the convention & visitors bureau. She is registered Unaffiliated.  Strickland’s mob went after her last time for daring to honor the village’s zoning commitments to the developers of The Greens at The Arboretum (pictured below). 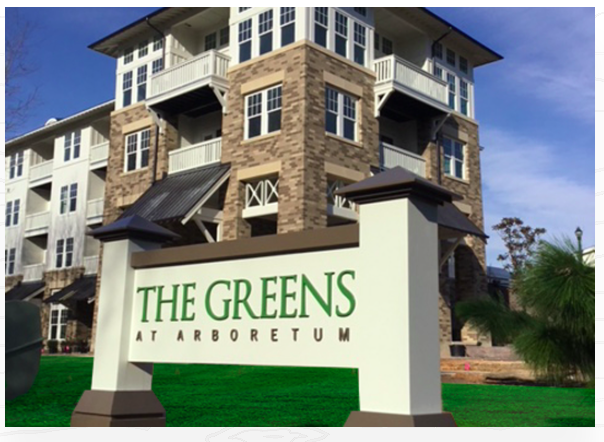 A real slum, eh?   Look at what this development replaced: 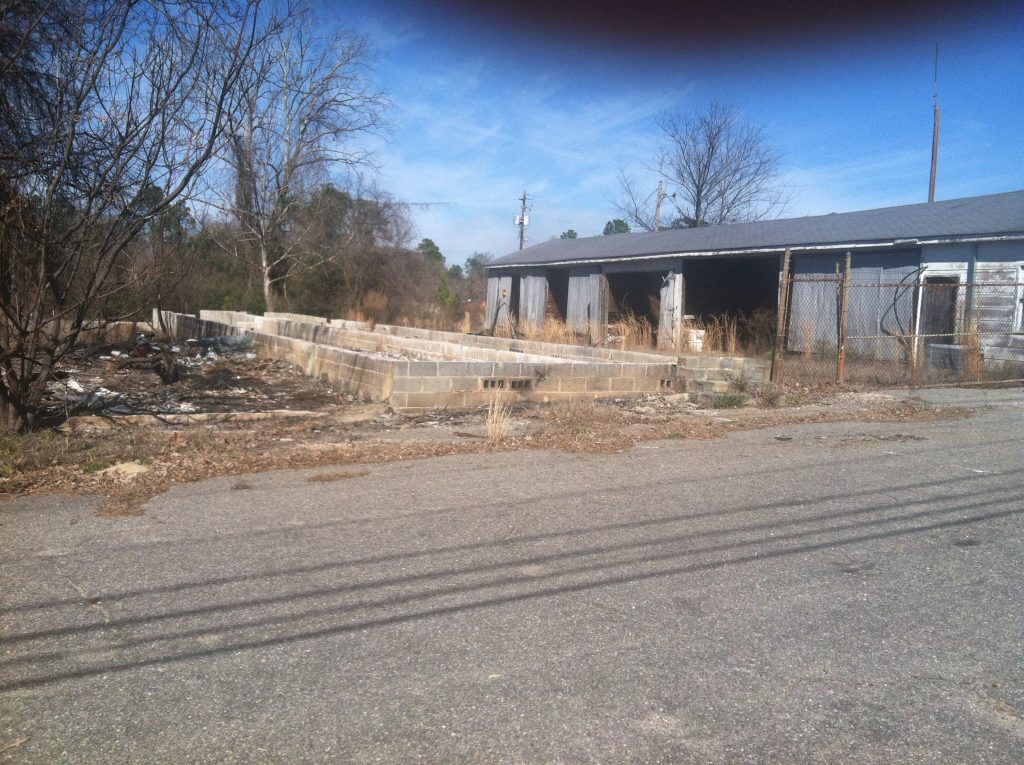 Seriously.   Strickland and his clique had ZERO to say about the bombed out, burned-out crackhouse-looking mess.  But tear it all down and build something visually-appealing?  *Unleash hell, man.*  (It gets worse around the corner from this site, too, BTW.)

Strickland and Hogeman are still running against the Greens at the Arboretum, even though they are fully built and mostly full. Thanks to the offensive against Berggren two years ago,  Strickland and Hogeman already have an ally on the council named Judy Davis.  If Strickland, Hogeman and Davis all make it on the council,  the days when you had to get your kid’s swing set approved by planning & zoning, and submit copies of your proposed yard fence plan to a star-chamber-like special committee will look like patty cake.

Davis, Strickland and his acolytes already teamed up to kill a planned facility by Pinehurst Medical Clinic.  (Southern Pines has already gladly accepted PMC and its expansion efforts.  Seems funny to have the PINEHURST MEDICAL CLINIC in Southern  Pines.)

Stuart Mills  is registered unaffiliated.  He is a retired businessman who is quite active in the community.  His wife, Helen, was the Democrat standard-bearer against senator Tom McInnis.  But those who know Stuart best  know that he does not share his wife’s liberal outlook on policy issues.

Berggren,  Mills, and (reluctantly)  Boesch are the  three best choices for November 5.  You can hop on the Strickland revolution and scare away any and all investment from the borders of Pinehurst.  Team Strickland has already espoused its promise to tighten  up on businesses.  So there goes the tax revenue from those businesses.  So, the village will have to depend on annexation and residential development.  But if Team Strickland follows through on its promises to increase regulation and empower planning and zoning,  that source may dry up.  (But, hey, the village attorney will be fat and happy — just like in the old days.)

That leaves upping taxes on those who already live here.