For a while, I had thought some monkey business was going on.  Strange things were happening at the Haymaker’s Facebook page.  We were being blocked from posting new items.  Bizarre pictures we didn’t select were being paired with our posts.  Recently, readers have told us they are suddenly limited as to WHERE they can share our material (only on their personal walls, not to other groups on Facebook).

Facebook IS a private company.  They can do what they want.  But they portray themselves as a purveyor of free speech and openness.  Much like the shameful and deceitful drivebys do. 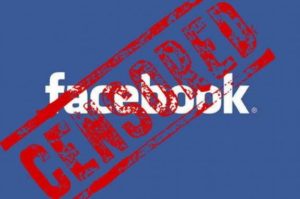 While our side has Rush, Hannity, Fox News and The Haymaker, their side pretty much has the controlling interest in the education, news, and entertainment sectors of our society.  They are in a position to fundamentally change this country and alter public perception on many things.

I am all for diversity of thought.  I welcome liberals posting here — as long as they can keep it clean and non-slanderous.  (We’ve found a grand total of TWO who can actually do that.)   You learn by reading, watching and hearing things you agree with AND those things you disagree with.

I frequently check in at BlueNC and at NC Policy Watch to see what those critters are up to.  My job is NOT to shut them up, but to demonstrate that their rhetoric is NOT the gospel truth and that there IS another side.  Far too many leftists — and some on our side — are way too eager to shut up and shut down anyone who dares to disagree with them.

So, what’s the answer? Boycott Facebook?  Nope.  Just recognize that you are dealing with people who are hostile to you.  Standing within their realm and showing the colors does more for our movement than you might realize.  We might convert some folks.  But, for the most part, we’re going to really tick off — just by existing and taking in oxygen — a bunch of commies.  And that is always sooooooooo much fun.