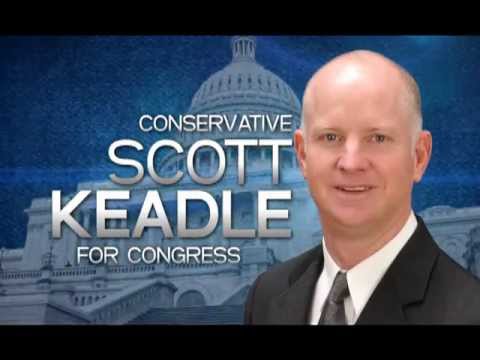 Eighth congressional district Republican voters have to make one more choice on July 17 — deciding whether Richard Hudson or Scott Keadle will move on to challenge incumbent Democrat Larry Kissell in November.

Keadle, a dentist and a former Iredell County commissioner,  is a man who has had enough with business-as-usual in Washington:

“We need a balanced budget.  If it is Wednesday, we need a balanced budget by Thursday.  This stuff about balancing the budget in 40 years is pure nonsense.  Those people in Washington would not be talking like that if this was about their personal finances or business finances.  If it was, they’d have that budget balanced YESTERDAY.”

As a small businessman and local leader, Keadle says he’s been frustrated by politicians who have turned public service into a lucrative career — putting pleasing party leadership and lobbyists ahead of serving the folks back home:

“We’re in a battle with Obama for the soul of this country.  This is serious. We have to weed out the yes-men. I don’t care if you’re John Boehner, or  the president, or a man from Mars — if you’re not here for what’s truly best for the country, you need to get out of my office and away from me. I’m not buying what you’re selling.”

Keadle has put out a 21-page agenda for his tenure in Congress, which he calls his Plan For America. :

“The country is off on the wrong track.  There are no jobs. There is no growth.  We need to cut regulations and simplify the tax code.  ”

As a dentist, Keadle has seen first-hand the effects government regulation has had in the health care field:

“Government has been meddling in health care for decades.  It’s become a regulatory nightmare.  After they’ve made this mess, this same group of people comes to us and says the system needs to be fixed and they have the solution.  The solution is simple: Government needs to get out of health care.  ObamaCare is bad for the country. It needs to be completely tossed out.  No compromise.”

If you want to see Keadle in person, you can attend the Thursday evening meeting of The Cabarrus Men’s Republican Club in Concord:

“It was meant to be a debate between me and my opponent.  My opponent backed out of the debate [Tuesday].  He said he had to go to a retirement party for his mother on Thursday. Now, I’ve got that audience to myself for the evening.”

Keadle has the backing of the conservative Club For Growth.  His opponent, Richard Hudson, is a former aide to NCGOP chairman Robin Hayes — who is also the former congressman for the Eighth District.