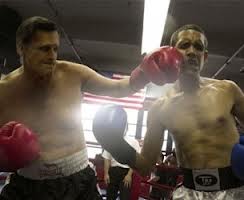 Usually, everything is BUSH’S FAULT.  We’ve been treated to years and years and years of fawning stories about PBS’s Jim Lehrer and what a great moderator he is.  Now that Barry The Magnificent got his clock cleaned by The Mittster, the media has apparently developed amnesia about all that previous stuff.

That’s just like lefties.  A kid CAN’T be stupid.  Republican cuts to school lunch programs  and a poor home life are to blame for his failing grades.  That criminal who robbed and murdered four people shouldn’t be executed.  If there had only been more federal “job” programs available, he might not have gone out there and committed those felonies.

Some folks in the media really need to wake up.  That debate clearly demonstrated that the Emperor — who they bent over backwards to sell us in 2008 — has no clothes.

(I can just hear Biden now — faking a cough, sticking a thermometer in hot water, and begging his doctor for a note so he can be excused from the debate with Paul Ryan.)