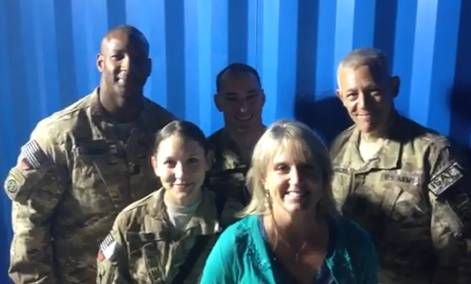 I got YET ANOTHER emailed release from congresswoman Renee Ellmers’ taxpayer subsidized PR flack.  I started reading it, and saw our Renee risked life and limb this week by heading into the Afghanistan war zone.  Good for her, I thought.

The release included a lengthy quote praising our soldiers, which was surely composed by said taxpayer-subsidized PR flack.  I scanned through that until I hit THIS passage:

This past weekend, Congresswoman Renee Ellmers travelled to Afghanistan as part of a congressional delegation to visit with American troops, Afghan officials, and civilians. The trip was organized by the United States Marine Corps to conduct oversight of U.S. operations in Afghanistan with a focus on the contributions, efforts, and concerns of women in the United States Armed Forces and local Afghan women. She was accompanied by fellow Congresswomen Martha Roby (R-AL), Susan Davis (D-CA), Donna Edwards (D-MD), and Kathy Hochul (D-NY).

Oh, yeah.  I’m sure that this was ALL The Marine Corps’ idea.  I can hear some of those Leathernecks now:

“I know we’ve got a lot to focus on now — with car bombers and allah-akhbar screaming suicide bombers and all.  But what I think we really need is a gaggle of biddies from Capitol Hill to baby-sit.”

So, THAT is what 9-11 and our missions to Afghanistan and Iraq were all about:  making sure the boys are nice to the girls.

The folks on The Hill have spent a lot of time placing restrictions on prisoner interrogation and detention.  They’ve pushed restrictive rules of engagement that don’t allow our troops to shoot back if someone is firing at them from within a residential area.  Now, it appears Renee and her girls are shoving the feminist agenda down our troops’ throats in the battlefield.

This trip appears to be yet another waste of taxpayer dollars by the “honorables” on Capitol Hill.   Renee got a great photo op.  We got stuck with the bill.

One thought on “Lt. Ellmers goes off to war …”