The folks on the left side of the aisle love to think they are smarter than us — that they know what’s best for us.  Roy Cooper and his team have put the state’s economy in a stranglehold since March — all in the name of the alleged greater good.

We’ve seen beat cops and sheriff’s deputies going after folks for cutting hair, serving meals, and other normally LEGAL law-abiding tasks aimed at eking out an honest living.   (Here’s a piece from an Onslow County businessman who actually had cops hiding out IN his place of business to — *gasp* – catch people doing business.)  Church services have been shut down.

Many of those “little people” Cooper & co. claim to represent are now out of work thanks to the Cooper Lockdown.  (*No customers in the dining room means NO TIPS.*).  Adding insult to these people’s injuries?  Ten-hours-plus on hold with the unemployment office.

There have been hundreds, if not thousands, of angry people marching on Raleigh protesting the heavy-handedness of the Cooper lockdown.

US Rep. Dan Bishop has been one of the few voices out there openly asking WHERE the checks-and-balances are on Cooper’s diktats. 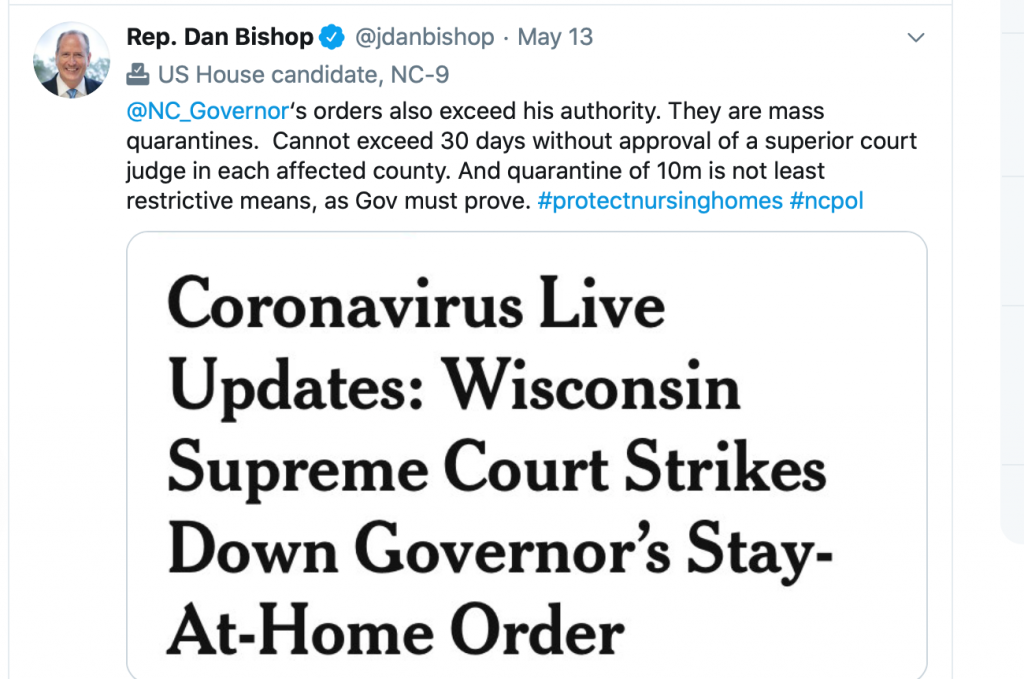 We’ve also got a respected UNC economist out there suggesting that Cooper’s lockdown has made things WORSE:

[…] A recent Moody’s Analytics study found that states with lockdowns were losing roughly 30% of daily gross domestic product each day the lockdown continued. How much is this for North Carolina? North Carolina’s annual GDP of $450 billion means that its daily GDP is $1.2 billion. Taking 30% of $1.2 billion gives us a lockdown loss of $375 million per day. And this doesn’t capture costs, as a result of social distancing, from multitudes of lost but valuable human interactions (the essence of what it is to be a human being, and undoubtedly of enormous value that’s likely far in excess of the commercial value lost to the lockdown), which are reflected to some degree in the heightened incidence of noncoronavirus deaths and illnesses, including mental-health impacts. But suppose that we said that ending the lockdown would restore 10% of the daily GDP loss, amounting to $37 million per lockdown day, and then added in social and other health costs from the lockdown of around $5 million per lockdown day. This highly conservative estimate would mean that the seven-case daily coronavirus reduction from an additional lockdown day is costing us $42 million ($37 million plus $5 million), or $6 million per case prevented.[…]

All of this healthy skepticism has generated some pushback.  We’ve had a federal judge strike down Gov. Doofus’s restrictions on church services.  Local lawmen are already pledging to refuse to enforce Cooper’s executive orders.

At least ONE restaurant owner is openly defying Cooper and his executive orders.   A group of hair salon operators is taking Gov. Doofus to court, as well.

(*And Thom Tillis, the Democrats and the drive-by media all want us to believe Roy Cooper has a 72% approval rating and is unbeatable in November.*)