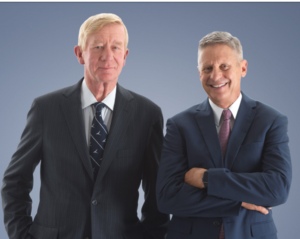 I’ve long maintained that the Big-L Libertarians are being hijacked by the Bernie Sanders / Occupy Wall Street crowd.  Look at pizza man Sean Haugh.  When he ran for the US Senate in 2014, he actually siphoned votes from Democrat Kay Hagan.  During the debates, Haugh made SOME good limited government points.  But most of what he said could have easily been uttered by your typical Chapelboro leftist loon.

People assumed that — because small-l libertarianism and conservatism are so closely related, and the GOP is allegedly the conservative party — a Libertarian candidate would take away from a Republican candidate. But the Big-Ls appear to be going full circle to intersect with the radical left on a lot of points.

This year, we have a watershed election at the presidential level.  We can expect some dramatic change — either way the vote goes.  You’ve got some normally Republican voters who are actually flirting with the idea of lining up behind the Libertarian presidential ticket.  From what I am seeing and hearing, Gary Johnson and Bill Weld are not exactly an ideal conservative alternative:

Speaking at a CNN town hall Wednesday, Johnson addressed a “Black Lives Matter” protestor by pandering to his leftist sensibilities and endorsing the ridiculous notion of mass racism against black people.

“What it has done for me is that my head has been in the sand on this,” Johnson said. “I think that we’ve all had our heads in the sand and let’s wake up. Discrimination does exist, has existed, and for me personally, um, slap, slap, wake up.”

Johnson’s VP nominee Bill Weld continued the same talking points, saying that blacks are more likely to be killed by law enforcement than whites for no reason at all.

Wait.  The leftist Washington Post would disagree with that statement: 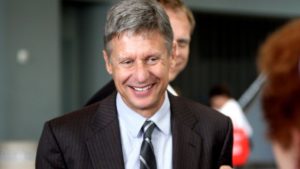 Yep, 732 IS bigger than 381.    That’s not exactly something to stand up and cheer about.  But it illustrates how ridiculous the BLM crowd and their driveby enablers are with the facts.  In the same article, The Post tries to spin that data back to the left:

According to the most recent census data, there are nearly 160 million more white people in America than there are black people. White people make up roughly 62 percent of the U.S. population but only about 49 percent of those who are killed by police officers. African Americans, however, account for 24 percent of those fatally shot and killed by the police despite being just 13 percent of the U.S. population. As The Post noted in a new analysis published last week, that means black Americans are 2.5 times as likely as white Americans to be shot and killed by police officers.

U.S. police officers have shot and killed the exact same number of unarmed white people as they have unarmed black people: 50 each. But because the white population is approximately five times larger than the black population, that means unarmed black Americans were five times as likely as unarmed white Americans to be shot and killed by a police officer. […]

[…] “(Young black men) are four times as likely to be incarcerated if they have intersection with law enforcement as white people are, their educational opportunities are not there, we have to get them into education and concentrate the power of the government to make sure there are jobs available for them,” Weld said. “When there’s a national emergency the government has to respond, libertarian or no libertarian.”[…]

Wow.  “Concentrate the power of the government to make sure there are jobs available.”  What do you limited government folks think about THAT?  Bernie Sanders would approve of a statement like that.  (He’s probably said it — or something like it — more than once on the campaign trail.)

And what does the Johnson / Weld ticket think of The First Amendment’s protections for religious freedom? :

[…] Many conservatives have vowed to vote for Johnson over Trump on “principle,” ignoring that Johnson has proven himself more of a leftist than a libertarian on the issues of abortion and religious liberty. Speaking of religious liberty, here’s what the supposed “libertarian” had to say on the matter:

And this little gem on Christians being forced to service same-sex weddings:

“[T]hese religious freedom laws are really just a way to discriminate against gay individuals, the LGBT community,” he said. “That’s what they are about. I don’t think that the Libertarian Party should be engaged in any way in endorsing discrimination.”

Unless, of course, you happen to be one of those “black-hole,” church-going types.

How libertarian is it to use bureaucrats to beat down ONE baker who refuses to cater a gay wedding, when there are a multitude of other bakers to choose from?

Folks, Trump is not perfect.  Neither Reagan nor Goldwater nor Helms were perfect.  .  But, face it — Our next president will be named either Clinton or Trump.  Under Trump, conservatives will get a much better deal than they would under the pants-suited one. Don’t let the emotions of the moment beat out good old fashioned common sense.