A key Republican and Democrat in the Senate are attempting to find a bipartisan compromise on gun control legislation that would make it harder for people on the federal terror watch list to purchase firearms or explosives.

Senate Majority Whip John Cornyn, R-Texas, and Sen. Dianne Feinstein, D-Calif., are seeking a legislative middle ground between Cornyn’s bill, which would impose a three-day delay for those on the list, and Feinstein’s bill, which would ban people on the terror watch list from buying guns.[…]

John Cornyn is not just some run-of-the-mill senator,  He’s the #2 Republican in the Senate.  Mitch McConnell’s right hand.  And Feinstein has been trying for DECADES now to get guns out of the hands of everyone who doesn’t work for the government. THIS is not a positive 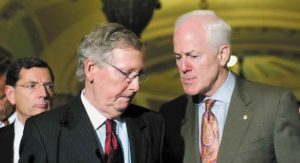 How will the names on the terror watch list be disseminated?  If someone learns he is on the watch list, don’t you think he’ll avoid the ‘pay-at-the-gun-store counter’ approach?

Lefties from Laura Leslie to the N&O editorial board have declared that Orlando NEVER would have happened if gun control measures had been tighter.  Never mind that the 9-11 gang used box-cutters and PLANES to commit their murder.  Never mind all of those goons in Iraq, Afghanistan and Israel who regularly use remotely-detonated IEDs and suicide vests to commit their murder and mayhem.  Three-day waiting periods did *A LOT* of freakin’ good in those situations.  (Wait.  Bombs / IEDs are already illegal aren’t they? Worldwide? Well, why are they still here ???)

I’ll give you a few to go get some meds and a stiff drink. It gets even dumber up there on The Hill:

[…] “She approached him and they’re talking,” a GOP aide told the Washington Examiner, referring to Feinstein and Cornyn. “We all agree on stopping known or suspected terrorists from purchasing a weapon, the question is whether we do it in a way that’s constitutional.”

Both Democrats and Republicans said they are willing to work on a compromise, but the two measures include substantial differences.

Feinstein’s legislation would place an outright ban on firearm purchases for those who appear on a federal terror watch list that includes those who are not permitted to fly.

Cornyn’s legislation would place a 72-hour delay on gun purchases for people on the terror watch list, and it would require federal officials to prove in court that the person should not be allowed to buy guns.

Republicans oppose the Democratic bill because they believe it denies due process to those on the watch list, which is notoriously error-prone and includes many innocent people.[…]

Let’s say I go to the local gun store and try to buy their best wares.  The clerk checks my ID, runs it through the computer and says: “Sorry.  You’re Abdul the ISIS dude.  Washington says I cannot sell these to you right now.  We can wait three days and go to court to try and appeal.”

Am I — Abdul the ISIS warrior — going to throw up my hands in frustration and abandon my hopes and dreams of jihad?  Hell, no.  Am I going to go to court?  Hell, no. ( *I have some jihad to do.*)

If you have bad intentions, what is the likelihood you’re going to go into a gun store and engage in a transaction that will likely call federal law enforcement’s attention to you?

Unbelievable.  We are under attack from a worldwide criminal element, and our “leaders’ ” response is to further hamstring and regulate the potential victim population?

Crap like this betrays the intentions of The Constitution and is a slap in the face to the folks who gave these Republicans a majority in Washington.

Our government cannot — and will not — protect us.  They can respond after the fact.  Your local law enforcement will admit that to you.

Our “leaders” need to back off of the Second Amendment, and allow Americans to properly protect themselves.  Wider gun ownership enhances the protection of the First Amendment, and does a great job of ensuring respect of the populace by the government.

We need an aggressive approach to this foreign enemy that wants to murder us all and destroy our culture.  And we’re NOT getting it from the folks who claim to be our defenders in DC.

Looking at crap like this, and thinking ahead to the November election, I am reminded of Hillary Clinton’s infamous quote: “What difference does it make?”

14 thoughts on “Is GOPe buying into liberal ‘gun control’ spin in wake of Orlando?”