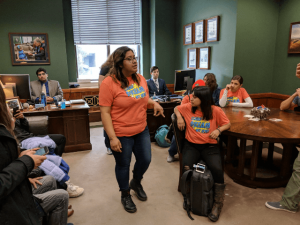 Why are these people harrassing their amigos?  Could they just be in the wrong place?:

As the group of illegal aliens and open borders activists — with the George Soros-fundedgroup “United We Dream” — stormed Tillis’ office demanding amnesty, one illegal alien from North Carolina shouted, “F*ck this conservative! F*ck this person!”

I’ve already talked to Thom Tillis in person and he looked me in my face and told me that we have until March 5. He told me to my face that undocumented youth are not immigrants, are not priority. I’m not a priority.

F*ck this conservative! F*ck this person!