Once again, somnambulant Jim Morrill has the story wrong: 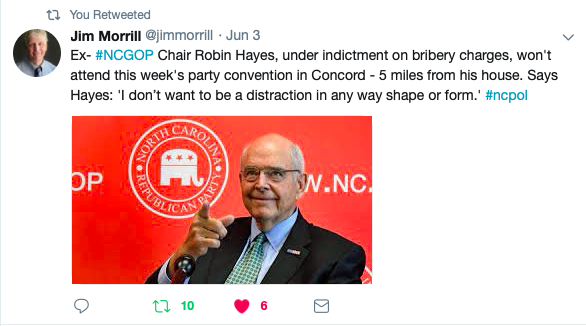 *Doesn’t want to be a distraction.  How freakin’ thoughtful.*

Also, he’s not Ex.  He’s STILL the chairman.  (He made a dubious, sketchy appointment of an “acting chairman.”)   Apparently,  there are not enough cojones in NCGOP leadership  to kick his indicted butt to the curb.  Nowhere else could an executive keep their job after being slapped with FIVE federal criminal indictments.

If Hayes actually cared about the party, he would have resigned post-haste.

What’s amazing is that the same party that allows him to continue to lurk in the shadows is seriously considering electing a new slate of leaders who will likely lead to the same scandalous and incompetent environment.

2 thoughts on “#hayesscandal: The Defendant, a “distraction”?”