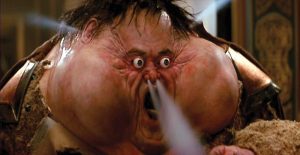 Once again, heads will be exploding over in Blinky and Scowly’s offices in Jim Goodmon’s special little socialist fantasy world.

Blinky and Scowly are ALL over the place trying to sell the idea that kids are being hurt by “education cuts.”  Their comrades in the drive by media AND the North Carolina Democrat Party are also beating that dead horse.  Unfortunately, many Republican candidates are buying into this too, telling anyone who will listen: “Yeah, we spent more too. Oh yes we did.”

When running your business or your household, the primary concern is NOT spending more money, but spending it as wisely as possible.   Government — and Democrats — still don’t get that concept.

I can tip my waitress $50,000 at lunch.  I’ll be broke, and I’ll just as full as I would have been if I had only thrown her 20 percent of the total bill.  At least, with a 20 percent tip, I’ll have money left over to do other important stuff like pay the light bill, put gas in the car.

Public school bureaucrats and their leftist politician allies are always moaning about how not enough money is spent.  Sometimes, I think you could dump the state’s entire GDP into the public school system, and that crowd would still complain.

The next time you hear Roy Cooper or any other Democrat candidate moan about mean ol’ Republican tightwads hurting the kids by not spending enough money on schools, hit them with either of these two studies.  Here’s one from 2008 from the folks at The Heritage Foundation:

[…] The evidence about Education spending and achievement leads to the following important lessons:

American spending on public K-12 education is at an all-time high and is still rising. Polls show that many people believe that a lack of resources is a primary problem facing public schools. Yet spending on American K-12 public Education is at an all-time high. Approximately $9,300 is spent per pupil. Real spending per student has increased by 23.5 percent over the past decade and by 49 percent over the

past 20 years.
Continuous spending increases have not corresponded with equal improvement in American educational performance. Long-term measures of American students’ academic achievement, such as long-term NAEP reading scale scores and high school graduation rates, show that the performance of American students has not improved dramatically in recent decades, despite substantial spending increases. The lack of a correlation between long-term Education spending and performance does not suggest that resources are not a factor in academic performance, but it does suggest that simply increasing spending is unlikely to improve educational performance.
Increasing federal funding on Education has not been followed by similar gains in student achievement. Federal spending on elementary and secondary Education has also increased significantly in recent decades. Since 1985, real federal spending on K-12 education has increased by 138 percent. On a per-student basis, federal spending on K-12 education has tripled since 1970. Yet, long-term measures of American students’ academic achievement have not seen similar increases. Long-term test scores among specific student populations, including ethnic minorities that have been a main focus of federal Education policy, have improved some. However, the achievement gaps among white, black, and Hispanic students persist in test scores and graduation rates. 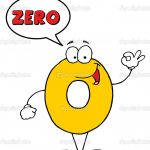 Speaking of resource allocation — How many $100,000-earners do YOU have in your county’s central schools office, rarely setting foot in a classroom?   Want some more?  Here is The Cato Institute from 2014, with much the same story:

[…] Parents often share the view expressed by Horace Mann, godfather of American public schooling: they want their children to have bet- ter educational options than they had. They want the best. Aware of this fact, state policy- makers constantly seek to improve public school outcomes (or, for the politically jaded, they at least wish to appear to be doing so). But how well are they succeeding?

At the national level, the results do not look good. The performance of 17-year-olds has been essentially stagnant across all subjects since the federal government began collecting trend data around 1970, despite a near tripling of the inflation-adjusted cost of putting a child through the K–12 system.[…]

The state-by-state results of this investiga- tion are reported in the subsections that follow, but the overall picture can be summarized in a single value: 0.075. That is the correlation be- tween the spending and academic performance changes of the past 40 years, for all 50 states. Correlations are measured on a scale from 0 to 1, where 0 represents absolutely no correlation between two data series and 1 represents a per- fect correlation. Anything below 0.3 or 0.4 is considered a weak correlation. The 0.075 gure reported here suggests that there is essentially no link between state education spending (which has exploded) and the performance of students at the end of high school (which has generally stagnated or declined).[…]

Here’s a pretty picture from CATO’s study to hammer the point home: 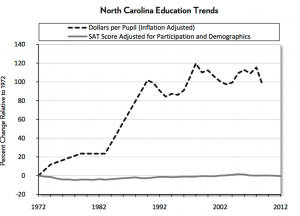 This is for 1972-2012.   The dotted line shows the rate of government spending on education in North Carolina.  The solid-colored line at the bottom of the graph indicates how students have fared on the SAT during that period.

Oh, and on the state level — it’s a BIG FAT LIE that the GOP-controlled General Assembly

Gosh.  When I think of “starving,” I think of portions going DOWN.  All of those numbers appear to be INCREASING each year.

3 thoughts on “Guess what? Spending more money makes NO DIFFERENCE on student performance”