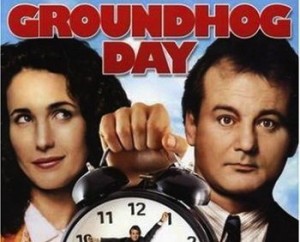 Remember the classic movie featuring Bill Murray, where his character kept experiencing the SAME DAY over and over again regardless of what he said or did?  Well, NCGOP chairman Hasan Harnett is living that movie. He keeps getting hit with the same weak, baseless allegations — even though he bends over backwards to provide documentation to refute them.

The mutineers within his organization — still trying to undo the chairman election from June 2015 — have put out another nasty-gram insinuating a lot of bad behavior but providing no credible evidence.

Harnett, like you’d expect from someone under public attack, has responded:

The NCGOP Central Committee is charged with the mission of creating an effective Republican organization in every political Precinct in North Carolina. With this in mind, there is much work to do in order to get our precincts, counties, and districts ready for a battle royal against the Democrats in November. Unfortunately, witch hunts won’t help us achieve our organizational mission and neither will wild goose chases rehashed by members of the NCGOP Central Committee and staff. The overall effect; however, will effectively drag down the NCGOP, Republican candidates and judges running for office. I know that there are many who want to move forward and many who stand in this with me for the sake of the NC Republican Party.

To my surprise again, the press, media, and many of you have received yet another public press release from Tom Stark, NCGOP General Counsel, and the NCGOP Central Committee; they continue their desire to publically tarnish the NCGOP, my name, and reputation in an effort to remove me as the NCGOP Chair, for the sake of what? I have tried for the past few weeks to resolve this privately to no avail.

For the last time, let’s set the record straight.

Alleged Hacking: After I called the convention on March 7, 2016, Dallas Woodhouse the NCGOP Executive Director, without any authority to do so, kicked me, the NCGOP Chairman, out of the databases, website, and my own email. I tried for many days to resolve these disputes internally, but Woodhouse refused. Dallas Woodhouse sent me an email on March 8, 2016, stating that the NCGOP Vice Chairwoman and my email were disabled because of a security threat to our website. After being shut out of the databases, website, and my own email, NCGOP Vice Chairwoman Michele Nix and I were contacted by Ken Robol, the website coordinator for the 3rd District NC Republican Party, telling us that he can “hack” into the website. As shown in the attached PowerPoint, neither Michele Nix nor I solicited the hacking of the NC Republican Party website and never ordered anyone to hack into the website. The allegations that I ordered Ken Robol to hack into the website are completely false and untrue.

After text message conversations (see screenshots) with Ken Robol, Robol immediately went to Tom Stark, NCGOP General Counsel, to make a statement saying I ordered him to hack the NCGOP website. Ironically, the organizer of the NCGOP Central Committee meeting to censure me was Kim Cotten West, the NCGOP 3rd District Chairwoman, the same district where Ken Robol resides. I would call into question the statement from a person who “hacks” websites as a credible source for the truth. As you know, I released screenshots of the messages between me and Ken Robol eleven days ago (see attachment) as I have nothing to hide and did n

Tom Stark falsely stated that I used the term “entrapment,” I did not. Furthermore, making the claim that using the word “entrapment” somehow states an admission of guilt is absurd, especially coming from a legal professional.

Alleged Funneling: Tom Stark also falsely implies that my setup of an EVENTBRITE account means I was trying to funnel money away from the party. Nothing could be further from the truth. After requests had been made to the staff to create an EVENTBRITE page for a fundraising event, a sample EVENTBRITE account was set up. The sample site was not set up to collect and there were no intentions to collect money through this sample account. Its purpose was to demonstrate the idea of what was needed for the upcoming fundraising event. Days later an NCGOP staff member finally created an official EVENTBRITE page, which was necessary for ticket purchase for the fundraising event held on March 20th (raising over $21,000 for the party). The NCGOP State Convention Eventbrite page was set up by the NCGOP staff and money was never directed away from the NCGOP.

Harnett says the scrutiny really needs to be applied to Dallas Woodhouse:

I have been more than willing to converse and talk about how we move forward, however, the conversations, as you see in these messages from Tom Stark, NCGOP General Counsel and members of the NCGOP Central Committee, are all one sided. Let us remember the examples of illegal and unethical behavior displayed by Dallas Woodhouse, NCGOP Executive Director, as he forged my name to a fundraising letter and violated the Plan of Organization in said letter by effectively endorsing a primary candidate. He also sent a call to convention, which he has no authority to do according to the Plan of Organization. There is a history of questionable choices in his past, which speak to the integrity of his character. However, we are talking about me, in a situation where our NCGOP General Counsel and NCGOP Executive Director went to the press first. The NCGOP Central Committee through the help of the NCGOP staff went public nationally with the attempt to censure the NCGOP Chairman through a “no vote of confidence resolution”.

in our party. His statements are inflammatory and baseless while being laser focused on this attempt to take me down as the NCGOP Chairman; he fails in his duty to represent the interest of the party as a whole. His outspoken behavior is a disservice to our party, used to try and persuade members to take sides.

I pray that our Party can get past this madness, none of us are perfect. Yet, even with these untrue allegations against me, attacking my character, and good name, I still believe we are all on the same team. We must come together and stop the NCGOP witch hunts so we can go win against the Democrats in November. Many agree that there is so much at stake for this year. If the NCGOP Central Committee is not steadfast on its mission of creating an effective Republican organization in every political Precinct in North Carolina then what are we really doing? Anything outside of the organizational mission is a distraction. Distractions, like NCGOP witch hunts and wild goose chases rehashed, will cost us the Presidency, Governorship, our majorities in the legislature, and will put our entire delegate at the RNC in jeopardy.

Please contact Tom Stark, NCGOP General Counsel, and the NCGOP Central Committee members to demand that these public attacks stop (see below for a list).

One thought on “Groundhog Day for Hasan Harnett”