Leftists work hard to politicize EVERYTHING.  I get hit with their lectures during ANY ESPN broadcast.  The NFL is getting totally politicized this 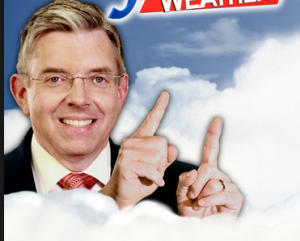 season with the whole kneeling nonsense.  Now, here comes WRAL’s Greg Fishel to lecture us troglodytes who went to frat parties, met girls, and had a life instead of cramming for those meteorology classes.

If you watch the linked clip, you’ll see Greggy lash out at unnamed sources he says are suggesting weather forecasts are trumped up by the government and the media  to fit the global warming environmentalist agenda.  ‘Pure unadulterated crap’ is what Greg says it is.  He even made international news going after Matt Drudge.

Interesting.  Never mind that the weather clique was WAY OFF in telling us what this storm was going to do.  In fact, I’d like to see a forecast that comes close to being on the money.  (I, for one, will never forget sitting in my house on Saturday watching the rain pour down, while my weather.com app says there’s “currently” only a 30% chance of rain.)

What had Greggy’s panties in a bunch was some recent editorializing by Rush Limbaugh and some pieces in conservative media, like Drudge and The Daily Caller:

Hurricane Matthew pummeled the U.S. Atlantic coast this week and some scientists and liberal pundits are already linking the storm to global warming after spending the winter smacking down skeptics.

When the inevitable blizzard strikes the East Coast, scientists and environmentalists pop up to warn the public against skeptics who argue winter storms disprove global warming.

But when a hurricane rolls around, those same folks come out of the woodwork to claim such storms are harbingers of of things to come as the world warms from human activities.

Hurricane Matthew is no exception.

Liberal blogs Slate and Grist have run pieces claiming major hurricanes, like Matthew, shouldn’t be appearing in October. Global warming is the only explanation for it, they claim.

These same publications attacked Republicans who cited winter 2014’s “Polar Vortex” as a major hole in predictions of catastrophic global warming. ThinkProgress, for example, hit Oklahoma Sen. Jim Inhofe for arguing “freezing temperatures across the country to explain climate change science is both ‘laughable’ and rigged.”

“If you’ve been hearing that extreme cold spells like the one we’re having in the United States now disprove global warming, don’t believe it,” Holdren said in a 2014 White House video. “The fact is that no single weather episode can either prove or disprove global climate change.”

“On our current path of unrestricted carbon pollution, NOAA researchers have determined that parts of the East Coast would see Sandy-level storm surges every year by mid-century,” Romm wrote.

“[W]e’re fairly certain that, whether we see more or fewer tropical cyclones, we will see more intense hurricanes and super-typhoons, like Katrina, and Sandy and Haiyan and Patricia and now Matthew,” Penn State University climate scientist Michael Mann told HuffPo.

Such claims are especially interesting because they are just that: claims. It will be decades before scientists can verify if global warming has, or will continue to, make storms more powerful.

So what’s the actual evidence on global warming’s impact on extreme weather? Not much.

“Current datasets indicate no significant observed trends in global tropical cyclone frequency over the past century,” the Intergovernmental Panel on Climate Change (IPCC) found in 2013. “No robust trends in annual numbers of tropical storms, hurricanes and major hurricanes counts have been identified over the past 100 years in the North Atlantic basin”

“In summary, confidence in large scale changes in the intensity of extreme extratropical cyclones since 1900 is low,” the IPCC found.

The Washington Post’s Chris Mooney — no skeptic of global warming — wrote “the science isn’t settled on precisely what is happening with hurricanes in the Atlantic.” He cited a recent scientific review on what we can say about hurricanes and climate.

“While no significant trends have been identified in the Atlantic since the late 19th century, significant observed trends in [tropical cyclone] numbers and intensities have occurred in this basin over the past few decades, and trends in other basins are increasingly being identified,” reads the 2016 science review.

“However, understanding of the causes of these trends is incomplete, and confidence in these trends continues to be hampered by a lack of consistent observations in some basins,” the review reads.

Here’s some more reading on the matter.

I think Greggy misspoke.  The actual ‘unadulterated crap’ is the end-product WRAL News spoon-feeds its dwindling viewer base every night (you know, old folks too tired or out of it to find the remote and change the channel).