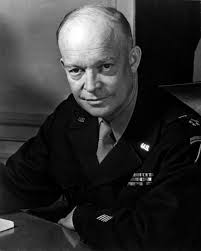 Pat McCrory loves to label himself an “Eisenhower Republican.”  Dwight Eisenhower was a great military leader who — as president — regularly knocked heads with the conservative base of his party.

Right now, the guv is trying to put us on the hook for a whole lot of debt to pay for road construction and renovation of state facilities. A little bird put an idea in our heads about researching how Pat’s hero financed the interstate highway system in the mid-50s:

Under the leadership of President Eisenhower, the question of how to fund the Interstate System was resolved with enactment of the Federal-Aid Highway Act of 1956. It served as a catalyst for the System’s development and, ultimately, its completion. Title I of the 1956 Act increased the System’s proposed length to 41,000 miles. It also called for nationwide standards for design of the System, authorized an accelerated program, established a new method for apportioning funds among the States, changed the name to the National System of Interstate and Defense Highways, and set the Federal Government’s share of project cost at 90 percent.

Title II of the Act – entitled the Highway Revenue Act of 1956 – created the Highway Trust Fund as a dedicated source for the Interstate System.

Revenue from the Federal gas and other motor-vehicle user taxes was credited to the Highway Trust Fund to pay the Federal share of Interstate and all other Federal-aid highway projects. In this way, the Act guaranteed construction of all segments on a “pay-as-you-go” basis, thus satisfying one of President Eisenhower’s primary requirements, namely that the program be self-financing without contributing to the Federal budget deficit. […]

Hmmm. Pay-as-you-go.  I know that must be quite a foreign concept to bureaucrats and politicians.  But for those of us who manage home and business budgets every day, it’s a quite familiar, quite sensible concept.

3 thoughts on “Gov. Pat likes Ike. Maybe he should emulate him.”