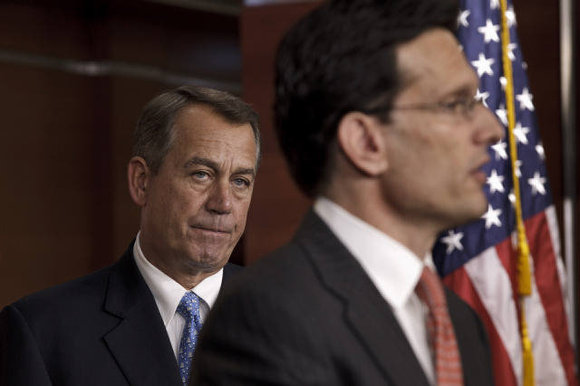 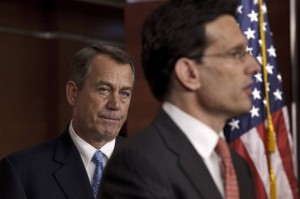 The New York Times is praising Speaker Boehner and Majority Whip Cantor for putting all that harsh conservative talk on the backburner:

Unpopular and divided, the once mighty House Republicans are laboring to repair their image and frame a new agenda.

Absent for now is a big, contentious docket similar to last year’s, which included the goal of writing new health care legislation to replace the Obama administration’s law. A long-promised overhaul of the tax code seems out of reach. When Majority Leader Eric Cantor, R-Va., issued a memo last week laying out the body’s initial legislative agenda, a centerpiece was a modest tax cut for small businesses.

With their poll numbers sinking and President Barack Obama attacking them – and in a speech last week poking fun at the infighting among their leaders – House Republicans long to establish a reputation as the party of job creation and to blunt the notion that they are recalcitrant and combative.

Senior Republicans are eager to minimize the drama, letting the party’s presidential candidate, when he is finally chosen, take the lead.

“Most of us expect the major decisions aren’t going to be made this year,” said Rep. Tom Cole of Oklahoma, a former chairman of the House Republican campaign committee. “It’s a very political year. The big thing for us is to not be part of the conversation instead of trying to inject ourselves into it.”

*Nice.* Instead of taking it to BarryO and his comrades (and offering the voters a stark contrast), DC Republicans appear to be content with running out the clock and offering up a slightly milder version of the statist agenda.  (As an aside, it was interesting to see this article reprinted in The N&O.  So convenient for us — we can now get the Old Testament AND New Testament of the Satanic bible in one place.  A true merger of evil leftist powers.)   Why was there no concern about “inflexibility” when the Democrats shoved ObamaCare down our throats?
I’m not interested in trading one set of statist appropriators for another.  I think we all made that CRYSTAL clear in 2009 and 2010.  Once again, we got lied to by the supposed conservative party.  Instead of getting conservative leadership to lead us away from economic collapse, Boehner & co. have volunteered to be pallbearers — to help Barry and Miss Nancy carry off America’s casket.  This is a profile in cowardice.  This is not about saving our country. It’s about personal job security — maintaining your access to the power and perks DC has to offer.
The House cleaning started in 2010 is far from complete.  Any incumbent self-proclaimed conservative who refuses to fight and falls in line with Boehner & Cantor on this “Bataan Death March” needs to be primaried and run out of town.  Don’t give these people money, don’t work for them, and certainly don’t vote for them until they decide to join us in the fight to save our country.