Yep, that’s right.  Jim Hefner used to call the shots at WRAL.  Now he teaches ”the practice of journalism” at UNC.  Here he is in the money-bleeding, 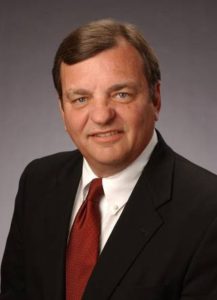 Sometimes you have to shoot your own dog.

And that’s just what the Republican establishment needs to do.

And, no, Donald Trump is not the dog.

But we’ll start with a dog.

If you are of a certain age, you will remember the movie “Old Yeller,” set in post-Civil War Texas. Yeller, a yellow Labrador retriever, contracts rabies after defending his adopted family from a wolf. The mouth-foaming, vicious pet is now a threat to the family.

Sometimes you have to shoot your own dog.

Now think about the current state of the GOP. It has a Trump problem. Party leaders are scratching their collective heads trying to figure out how Trumpism came to be. They might just turn on the radio to get some answers.

Tune into the likes of Rush Limbaugh, Sean Hannity, or Glenn Beck. Turn to the other conservative talkers who clog the radio dial these days. There you will hear the hosts defend the conservative family of thought with evermore corrosive, extreme and strident diatribes.

Interesting.  The SAME sensitive crowd that pines sentimentally over The First Amendment — i.e., refusing to stand for the national anthem or the pledge of allegiance — is casting fire and brimstone over a guy with a radio show. MORE:

Hour after hour. Day after day. For decades, now. What are listeners hearing? More often than not, what they hear is who to blame for their problems.

And who is listening? Trump supporters. White men. They have been told over and over and over again they should be angry. Be angry with illegal immigrants. Muslims. Gays. Feminazis. Liberals. Even the Republican establishment.

Our government handed billions of dollars’ worth of our public radio airways over to these hosts 30 years ago. In 1987, under the pressure of corporate broadcasters, the Republican-controlled Federal Communication Commission (FCC) stopped enforcing the Fairness Doctrine. Later Congress tried to reinstate the doctrine, only to fail due to a President Reagan veto.

Before that, and beginning in 1949, the Fairness Doctrine required broadcasters to present both sides of controversial issues. The idea behind the doctrine: The public owns the airways and if you hold a license to broadcast, you cannot put controversial speech on the air without opposing points of view.

Political talk radio – conservative or progressive – could not pass muster under such a doctrine. Could Rush Limbaugh do his shtick if he had to interview Planned Parenthood’s head to balance a segment? A gay rights advocate? A Democrat?

The winners here are clear – enriched conservative talkers, their production companies, and corporate broadcasters. After all, that is what conservative talk radio is all about. Money. It sells to the listeners and the advertisers. What it is not about is the public interest.

Let’s see.  The Fairness Doctrine was out when the media was firmly in the control of The Left.  You had three networks, plus NPR and PBS.  THAT was it.  Those five are still here, but struggling in the face of all kinds of competition via cable and The Internet. (Our tax dollars are keeping NPR and PBS afloat.)  The Internet and the blogosphere are KILLING the Charlotte and Raleigh papers and the rest of the driveby media. Innovation and the market have created a lot of options.

Consumers have a choice between (a) the liberal crap dished out by WRAL, The Charlotte Observer and the rest of the driveby media, or (b) a multitude of options across the spectrum offered by the Internet and cable TV and satellite radio.  And they’re choosing (b) with a vengeance.  Give the people what they want, and you prosper.  Keep lying to them and insulting their intelligence — like the now defunct Air America, and the dying McClatchy dynasty — and you’ll keep bleeding. MORE:

[…] Even in days of specialized social media and myriad sources of digital information, the public airwaves are still the public airwaves. The U.S. government issues radio and TV licenses. To get a license, you should have to be “fair and balanced,” borrowing the Fox News slogan.

Trump is the wrong target for Republican leaders. Unrelenting conservative talk radio should be in the crosshairs. Right-wing radio is what created Trump or, at least, the opportunity for a Trump.

If your ideas are better, they will stand up to opposing points of view. If not, they will not. It’s called the marketplace of ideas.

Republican leaders surely benefit from Rush and his crowd. However, their pet is rabid. Now, the GOP is dealing with Donald Trump and a fractured party. Now, the party is losing control. Now, the Republicans should reinstate the Fairness Doctrine. They have the power to do so.

Sometimes you have to shoot your own dog. […]

It’s interesting how rowdy guys like this get when someone is saying something they disagree with.  Instead of debating the matter, they want to stomp it out of existence.

Remember how driveby types like this Hefner guy were moaning about the violence at Trump rallies and suggesting he was inciting the violence?  Remember how they jumped all over Sarah Palin for sending out a fundraising mailer with ”Bullseyes”’ over the faces of some Democrat politicians.  (That was just before Gabby Giffords got shot.)

Even musing about the GOP presidential frontrunner being shot ought to get you a visit from The Secret Service.  (Imagine the holy hell you would be facing if someone said something familiar about ol’ Barry.)

Words do have consequences.  The far-left Southern Poverty Law Center labeled the Family Research Council as a ‘hate group.’  Yes, the same Christian pro-life group whose president is a close friend of Charlotte’s Rev. Mark Harris.  A leftist nut went into the FRC’s Washington offices and tried to shoot everyone inside.  A heroic security guard saved the day.  The suspect said he was inspired by the ‘hate group’ designation.

From the Baltimore riots, to the L.A. race riots, to the FRC debacle, to this latest idiocy from Hefner, leftists are fanning the flames of violence and destruction.  And we on the right keep getting pegged as the violent ones.

I’m glad to debate the issues with anyone at any time at any place.  The issues are not worth resorting to physical blows.  (However, if you threaten me, my family, my friends, or my country with physical injury, you’ve got a different story.)