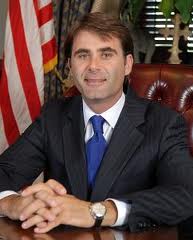 Former South Carolina lieutenant governor Andre Bauer appears to be trying for a political comeback by running for Congress in 2012:

The race for who will represent the new Horry County-anchored 7th Congressional District is starting to take shape, seven months ahead of the June 2012 South Carolina state primary.

Former Lt. Gov. Andre Bauer filed a statement of candidacy for the 7th Congressional seat on Oct. 24, according to information from the Federal Election Commission’s Web site. His address was listed as Myrtle Beach.

A statement of organization naming the “Andre Bauer for Congress” committee was filed on Nov. 1.

“I’m basically making the phone calls to see if the support is there,” Bauer said. “It’s been very positive.”

Bauer didn’t want to make a formal announcement until the newly-formed 7th Congressional District was approved by the U.S. Department of Justice. That approval was given earlier this week.

“Every day will get busier, and we’ll continue moving forward,” Bauer said.

Mary Brandenburger, FEC spokeswoman, said the statement of candidacy indicates a person’s interest to become a candidate, while the statement of organization designates the members of the principal campaign committee.

Scott Malyerck, who is listed on the statement of organization as the campaign committee manager, said that paperwork had to be filed once the campaign received contributions of $5,000 or more.

Bauer is running as a Republican. He joins fellow GOP candidates Thad Viers, Mande Wilkes and Gary Stephens, who have previously announced their candidacy.

Local attorney Parnell Diggs is the sole Democrat in the race so far.

Last week, the race lost one whom many felt was a definite contender.

State Rep. Alan Clemmons, R-Myrtle Beach, announced he wouldn’t be seeking the 7th Congressional seat, saying the timing wasn’t right for he or his family.

One of the reasons Clemmons gave was he still has a young daughter living at home. He did indicate he would seek re-election in 2012 for his S.C. House seat.

“I think Rep. Clemmons was right in his assessment that it’s not his time to run,” Wilkes said Wednesday.

She feels voters are really taking to an anti-incumbent wave and are ready to throw their support behind political novices.

“People don’t want these career politicians to have a career anymore,” Wilkes said.