What started out as a simple  get-out-the-vote message on Facebook from state House speaker Thom Tillis turned into a no-holds barred debate on the merits of the Raleigh establishment meddling in party primaries outside the beltline.

The whole debate got started — and eventually reported — by Lisa Marley, editor and publisher of the Truth or Dare blog:

In a candid exchange on Facebook with Truth or Dare, Speaker of the House Thom Tillis defended Arthur Williams publicly once again and inserted himself unnecessarily, once again, into our local House race. Tillis engaged in a debate with Truth or Dare and then deleted this blogger’s comments as well as some of his own, saying that Truth or Dare’s posting of these comments represented behavior that diverted attention from more important issues.  Tillis then banished this blogger to the land of un-friends.

Tillis tried to prop up Williams’ liberal voting record and then defended his own intrusion into the NC6 race. Probably realizing that he’d stepped into it once again, Tillis removed certain comments from the thread including my comments and some of his own, and un-friended me. Fortunately, technology being what it is, Truth or Dare captured the full exchange before it disappeared from Facebook. It is posted below for your reading pleasure.  You can still find parts of these comments on Tillis’ personal FB page, at least for now.

Note, this was captured via three screen shots.  This exchange took place beginning at 10:30am, Sunday, July 15th and ended just before 11am.  When you’re done with this, click over to the Beaufort Observer fortheir timely commentary. 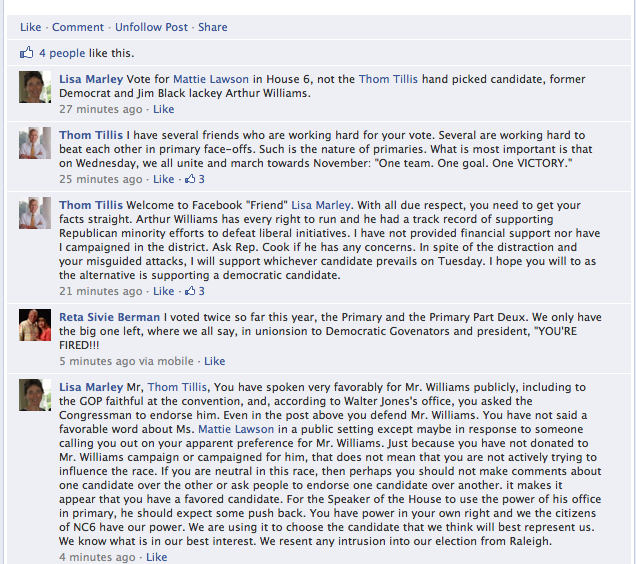 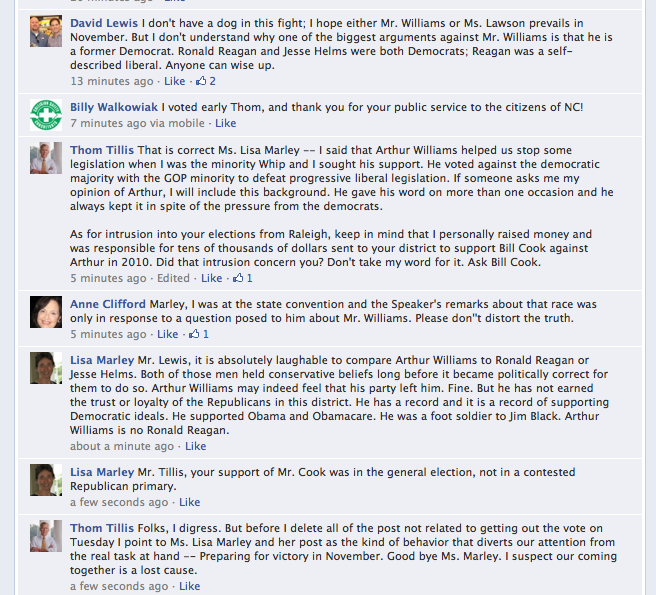 So, Thom Tillis and the boys in Raleigh think it is perfectly sensible to spend money to defeat a Democrat loyalist in 2010 — urge him to switch parties in 2011 — then turn around and support him for election to the same seat  in 2012?   Does the fact that the folks in this district threw Williams out in 2010 come into play here at all?
What Tillis and the GOP establishment are doing is cheapening the GOP brand.  It’s like all that is involved in being a Republican is writing an “R” next to your name.  The comparisons of Arthur Williams to Ronald Reagan and Jesse Helms are ludicrous.   Helms and Reagan were on the record PUBLICLY embracing conservative ideals YEARS and YEARS before they were first elected.
Are we expected to believe that Arthur Williams has truly had a come-to-Jesus moment regarding conservatism after just 18 months away from Jones Street?
This is sleazy backroom politics at its worst.  If you folks on the Outer Banks roll over and let Raleigh stick you with this — just imagine what they’ll try to shove down your throats next.
Thom Tillis is worried about his own sweetheart deals.  This has nothing to do with the interests or well-being of your district.