Yes.  Those words came out of the mouth of a sitting US senator: 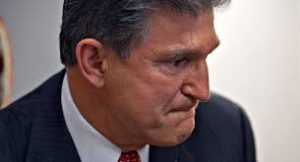 During the June 16 airing of MSNBC’s Morning Joe, gun control Senator Joe Manchin (D-WV) let his mask slip by expressing frustration that due process is preventing the pursuit of more gun control.

Manchin made a name for himself by opposing the NRA and pushing new gun controls for law-abiding citizens in the wake of the Sandy Hook Elementary School shooting. He spent months pushing for an expansion of background checks, even though he admitted the checks would not have prevented the Sandy Hook tragedy.

During his Thursday appearance on Morning Joe, Manchin pushed for more gun control via terror watchlists and other such mechanisms, but said due process sta

nds in the way.

Manchin talked about his hopes that there could be bipartisan support for gun control, then said:

The problem that we have, and really the firewall that we have right now, is due process. It’s all due process. So we can all say we want the same thing, but how do we get there? … The shooter in Orlando was brought in twice by the FBI. They did everything they could … but there was no way for them to keep him on the NICS list or keep him off the gun buy list. So can’t we say if a person’s under suspicion there should be a five-year period that we have to see good behavior [before they can buy a gun]? Maybe we can come to that kind of agreement. But due process is what’s killing us right now.[…]

Feeling that chill up your spine?  This is not some kook talking.  This is the former governor of West Virginia — not exactly Massachusetts or California — who currently represents his state in the US Senate.  He is one of the more conservative members of the Democrat caucus — regularly venturing over to the GOP side of the fence.  But, wait there’s more:

[…] Former RNC Chairman Michael Steele was on the show and asked what Manchin plans to do for people who already own guns but “may appear on the list” in the future? Manchin talked about honoring the Second Amendment right to own a gun, then suggested a confiscation mechanism to take guns away from people who come under suspicion.

Got that?  “A confiscation mechanism to take guns away from people who come under suspicion.”   We’re not talking about people arrested for or convicted of crimes here. 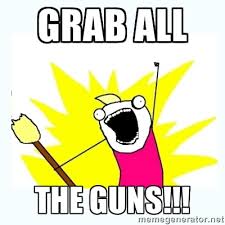 These watch lists are secret, and there is no real metric for determining how you get placed on them.  (Can someone simply say ‘That Clifton guy with that website creeps me out. You need to keep an eye on him.”  And BAM! — I’m on a terrorist watchlist?)   There have been all kinds of cases where people have accidentally been placed on them.

It’s amazing this discussion has gotten this far on Capitol Hill — given that is firmly under control of the supposed, alleged conservative party.  Some of the most notorious, horrific acts of terror and mass murder in this country in recent years have been committed through the use of fertilizer, pressure cookers, box cutters, and airplanes.  Crack down on gun purchases, and these maniacs will simply find something else to accomplish their mission with.

It’s incredibly disturbing that this guy is not receiving a verbal beat-down from a majority of our “leaders” in DC.  Due process is one of the most important founding elements of our country.

Folks, this is getting downright scary.  I think we are ON OUR OWN here.

8 thoughts on ““Due Process is What’s Killing Us Right Now.””