Another resident of the South McDowell Street low-testosterone zone has raised his head up to lecture the rest of us on ”civility”:

I think the Haver Currins have hit on something important. Sometimes public protest is all about getting your message across. In those cases, you want everybody to know more about the slogan on your sandwich board, and you’ll gladly explain yourself to all comers.

But other times, it’s about showing the world how zealous you are, and I think that’s the case with the anti-abortion folks. They’re not really interested in communicating with anybody. I concluded this because the young man waving a Bible and delivering an amplified sermon wouldn’t speak with me Saturday or give me his name.

(I found out later that it’s Taylor Tsantles. His ideas are all over Twitter, where nobody challenges them.)

I spoke with one of the other demonstrators, Marc Jackson, a nice fellow who tried to tell me about the Gospel of Jesus Christ. But before he could get very far, Tsantles tapped him the shoulder and led him away.

They probably figured you for a LOST CAUSE and moved on. 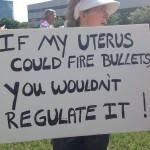 So here’s what I’m saying:

If you disagree with somebody who isn’t likely to listen, the tactic is a good laugh. Nothing can disarm the humorless quite like humor.

Is that what Barry Saunders of the N&O does?  Or Myron Pitts at The Fayetteville Observer?  With these guys — the token blacks in a sea of liberalism in their respective newsrooms — EVERYTHING is a racist conspiracy by whitey against the poor down-trodden black folks.  If I wrote EXACTLY the same stuff these guys regularly turned out — except transposing “white” for “black” and vice-versa — I’d be crucified as a racist. There’s no humor there.  It’s all about beating someone’s reputation to a pulp with insinuations of racism.  *HA HA*.  MORE:

Maybe I’ve spent too many years as an ideological neutral, at least professionally, but I’m far more likely to listen to someone carrying a sign that says “I Miss Sonny Bono” than I am persuaded by somebody with a bullhorn.

I don’t begrudge anybody an opinion or the right to express it. I’ve heard and documented both sides of this debate numerous times over the past 20 years in newspapers. But to me, if you’re yelling at strangers through a microphone, you’re a bully. The Bible you’re waving doesn’t change that. 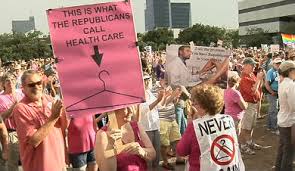 Does that include The Round Rev, hisself — Bill Barber?  Judging from the loving treatment Josh and his co-author gave Barber and his rabble in this, um, news story, banging on pots and pans, “fiery rhetoric,” and raging about ”tyranny” are A-OK.  MORE:

Anyway, back to the story.

Last week, the Haver Currins recently posted pictures of their counter-demonstrations online, and they quickly went mega-viral, turning up in Huffington Post, Elle and Cosmopolitan. There, they explained that they would be bringing numbers with them on Saturday.

“Our goal was to point out a little absurdity, but at some point it’s just not enough,” Tina told the Cosmo interviewer. “We would love to see this more humorous take on combating these hateful things spread.”

It did. The Haver Currins drew roughly 50 people to A Preferred Women’s Health Saturday morning, starting at 8 a.m. before the pro-life group arrived.

Their signs grew even more ridiculous. Some examples:

When Marc Jackson held up his sign, “Pregnant Mothers Need Support Not Abortion,” Ana Catherine Dickens stood beside him with her own sign, which featured an arrow pointing at Jackson and read, “He’s single.”

While Tsantles and others preached, the counter-demonstrators chanted, “I like turtles.” One member of the church group, seeming frustrated, sighed and said, “I know you like turtles …”

One woman from the Haver Currins’ group held a radio aloft and blasted a song by The Wiggles.

Try heckling some drag queens.  Try taking cookies to some Abortion Fan Club hags.  (I don’t know if Gov. Pat was trying to be funny, but he scored humor points with me.) See if Josh and his low-T homies give you props for your humor and creativity. MORE: 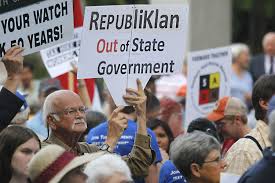 You had to laugh. I did. Here were two groups with vastly different points of view, one arguing with Scripture and the other with comedy. For my money, the jokers won by a mile.

Maybe if we turned down the volume of our own personal slants, took ourselves a little less seriously and considered the power of playfulness, we might, in the immortal words of Rodney King, all get along.

By the way, Mr. Haver Currin, so lovingly praised in Shaffer’s column is a “music editor” at Indy Week — a very tolerant publication, if you happen to wholeheartedly agree with the Carrboro-Chapel Hill crowd.

7 thoughts on “Drive-by columnist: You righties need to lighten up — Just like WE DO!”