The right reverend William Barber waddled up to Philly this week to show the world just WHY we here in North Carolina consider him such an important cultural, um, *treasure.*  His speech before the Democrat National Convention had the assembled freak show performers just giddy.

Despite what all the drivebys tell you, The Round Rev is an embarrassment to our state on par with John Edwards and, well, Orange County.   Black North Carolinians had to be soooooo proud to see their self-proclaimed spokesman performing on national television like a circus act on the old ”Ed Sullivan Show.”  (Funny, though.  All I ever see following him around are a bunch of aging hippies from Orange County.)

As a Christian, I was profoundly disturbed at The Round One’s implication that most of us (not registered Democrat)  use Christianity to “camouflage hate” and promote selfishness and greed.  (In his case, I guess selfishness and greed are A-OKAY in two circumstances: (1) at the dinner table, and (2) during the application of hair product.) 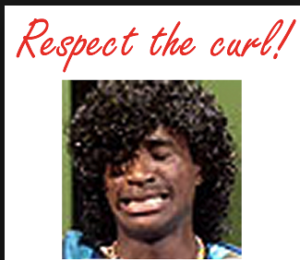 And as far as, um, “camouflaging hate.”  Was he talking about THIS GUY?

Every Sunday I attend church with people who agree with me politically, and many who disagree with me.  Our congregation includes gay people, people of color, and even Obama voters.  But, unlike with The Round Rev and the rabble in Philly this week, we leave labels like that at the door.  We’re all just Christians and human beings.   Together we pray, invest sweat equity in various mission projects, and even break bread in fellowship.  Rarely does one’s party registration or bedroom activities or racial heritage ever come up.  And we do it all without demanding money from the government

Stuff like that is a problem for people like Barber, Jesse Jackson, and Al Sharpton. They are only useful to their leftist masters for keeping their black brethren riled up, angry, and ready to vote en masse for Democrats.  If things calmed down, and people lived in harmony, who

would need these snake oil salesmen?

It’s pretty obvious the DNC game plan is to rile up the black vote on their own.  Hillary and Timmy are so white bread and bland.  They’re not going to be able to do it like Barry did. So, loudmouth race-baiting surrogates like Barber are going to get plennnnnnnnty of TV time this election cycle.  Count on it.

It’s also obvious North Carolina is important in the presidential race.  It is a significant prize that had once been a given for the GOP, but is now competitive (as exemplified in the last two presidential races).  The nation has become so polarized that the number of toss-up states has dwindled significantly.

North Carolina is looking even more tempting this year.  We have a weak GOP statewide ticket.  Our governor and senator on the ballot this year are not exactly running barnburner campaigns.  The DNC email leaks show the meddling by the national Democrats in the anti-HB2 protests and the voter ID lawsuits. Roy Cooper and many out-of-state Democrats have been instrumental in organizing economic boycotts of North Carolina.

The liberal hordes are attacking on multiple fronts: ballot integrity, family values issues, and race.  Keep things stirred up with lawsuits, boycotts, and demagogic street protests. Tearing down our state for the sake of capturing / protecting power.

Does that sound like a crew that has the best interests of our state and nation at heart?

7 thoughts on “#DNCinPHIL: The Round Rev Roars”