We posted an item a short time back where the Dare County GOP executive committee passed a measure demanding NCGOP chairman Robin Hayes appear before them to clarify his business activities regarding the commercial fishing industry and state regulators.

Well, Dare County GOP chairman Browny Douglas has sent us an update via email about this matter:

[…] Robin called me last tuesday to let me know it was going to be hard for him to get to dare but invited me to an upcoming meeting in columbia. He admitted his involvement in mfc appointment process. He said no one paid him. I told him i never said anyone did. They did not have to because he is one of them. He has been after the comm fishing industry since 95.

What he did by tricking the guv into those appts was give total control of N C coastal waters and their resources to the CCA thru the mfc.An already corrupt outfit. Special interest is now in charge from the guv down. Only the G A can save science. Otherwise it is political rule

Robin does not represent the states best interest in mind or heart.
I repeatedly would not agree to this meeting.
I will not be at columbia. Dare excomm business with robin stays in dare. Not ALPAM![…]

Here is the notice for the Al-Pam meeting Douglas and Hayes reference: 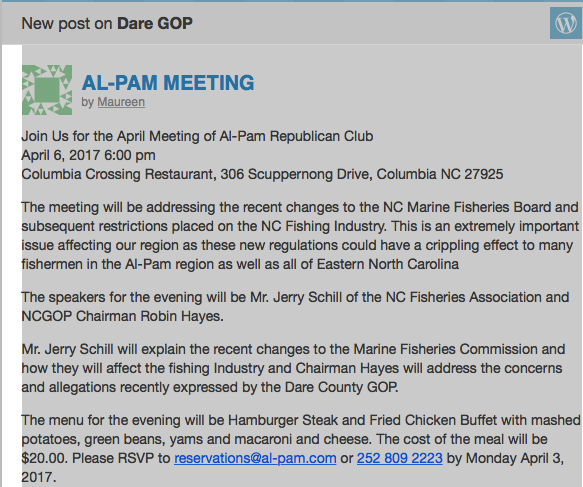 (According to Douglas, Columbia is about a 30 minute drive from Manteo, where he and his executive committee had asked Hayes to meet them.)