During the coup to oust NCGOP chairman Hasan Harnett, the plotters frequently labeled Harnett as a “security risk.”

After evaluating Woodhouse’s performance during and after that affair, one could easily assume one of two things: (1) Woodhouse is a bumbler, or (2) he is engaged in purposeful sabotage.

Dallas has spent a bunch of time on-air (Fox and MSNBC) talking politics with his brother Brad, who was implicated by Project Veritas in a scam to hire thugs to beat up old people at Trump rallies.    Oh, they partake in the James Carville-Mary Matalin scam.  You know, close family members in two different parties willing to slug it out for all of us on TV.  Of course, they all go home lovey-dovey after the lights go out and the cameras turn off.  So, the guy who has effectively been running the state GOP has a business arrangement — the TV gig — with his brother, a leader in the George Soros hard-left praetorian guard.  (*And HASAN was a security risk.*)

Dallas, for the last year or so, pranced around Raleigh proclaiming himself as “the governor’s

man” and passing himself off as a key component in the reelection of the governor and the chief justice to the Supreme Court.  Both reelections were bungled badly.  During the campaign, Dallas and his grandpa took several opportunities to cheap-shot Trump.  But Trump still won.  Things would have been a lot worse — talk to insiders who saw the internal polling — if not for the strength of the Trump wave in the state.  Yet, the Raleigh clique is cooing over Dallas and his grandpa and looking to give them two more years at the helm of the state GOP.

Many of us have been doing yeoman’s work beating back the barbarians trying to force the trannies into the ladies room.  Yet, Dallas, his grandpa, and a number of other members of the NCGOPe ruling clique are bending over backwards to weaken or do away with the law we’ve fought so hard to defend.  Here’s the latest release from Dallas’s operation at NCGOP HQ: 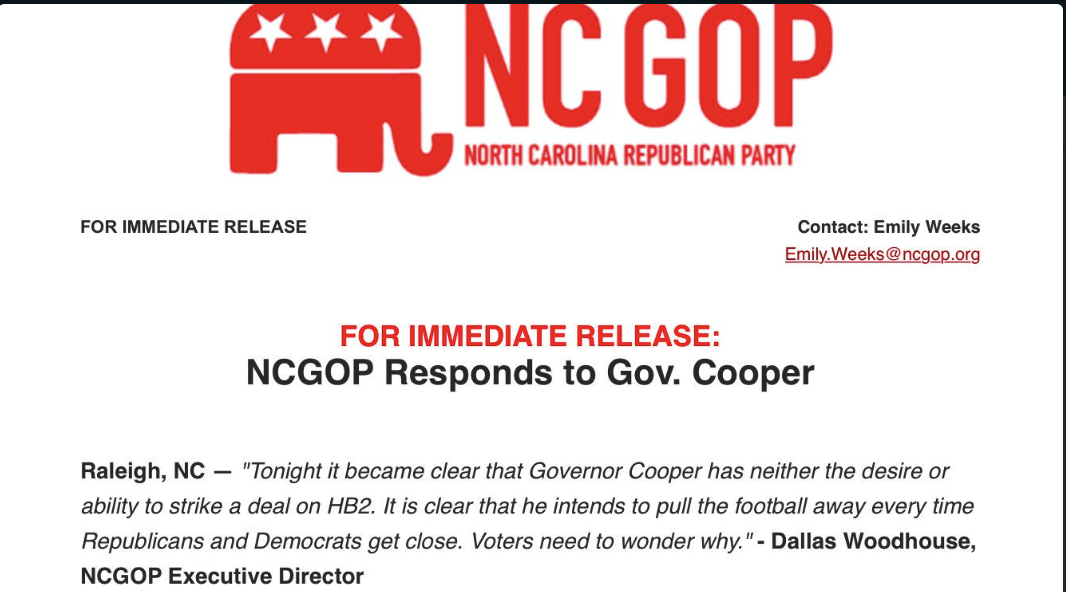 So, THIS is the NCGOP agenda?  Figure out a way to kill a bill the GOP fought to pass so that trannies can — after all — hang out in the ladies restrooms and locker rooms of North Carolina?

It’s either bumbling or purposeful sabotage.  You folks make the call.