It’s interesting to see and hear all of these Republican  bigwigs bemoan “legislating from the bench”: 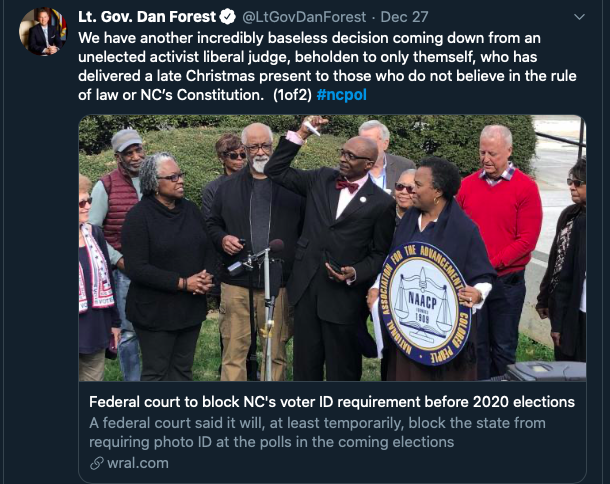 Thom Tillis and Richard Burr have voted for MANY of these judges who have overturned votes of North Carolinians and their state legislators.   The state GOP is backing a “ticket” for the state Supreme Court that includes Tamara Barringer — the most liberal GOP senator on Jones Street until she lost last year, who was also tied to a PAC that primaried conservatives —  and Phil Berger, Jr. — who has no discernible conservative record and is clearly on the ticket because of his daddy.   In 2018,  the state GOP abandoned a perfectly good constitutionalist state supreme court justice (before early voting was even finished).

And they dare to claim to be concerned about judges.  The judicial branch was created as a check on overreaching politicians and the ire of the mob.  To show little concern for recruiting and electing constitutional conservatives to the bench, and then BITCH about all of the liberal activists already on the court,  is the height of hypocrisy.

The lefties have been better about getting their people appointed and approved / elected to the bench.  (And waaaaaaaay too many GOPe types have been willing to help.)

Running empty suits with (R) next to their names on the ballot is not going to help.  Candidates who wholeheartedly believe in constitutional conservatism are key to saving this country.

7 thoughts on “Crocodile tears over judges”