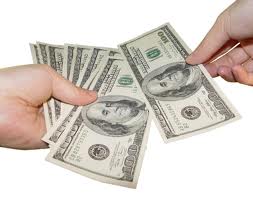 Robeson County is arguably one of the poorest, most crime-ridden locales in the state.  That’s why it is so strange that some of the biggest political names in North Carolina regularly make tracks there for fundraising.

One of the biggest names for political giving in Robeson County is James Harold “Bunk” Maynor.  From a 1988 driveby interview with a paid SBI informant, here’s a little history on Maynor: :

John Hunt is a man who says he knows too much – enough, he said, some people want to kill him to keep him quiet.

Hunt, who said he worked as a paid drug informant in Robeson County for the State Bureau of Investigation in fall 1986, explained his situation in two words: “I’m terrified.” […]

Hunt’s probation officer first approached him about working as a drug informant while Hunt was serving three-years probation for assault charges stemming from a fight with his ex-wife’s family.

Working as a drug informant appealed to him then, he said, because he had seen what drugs could do to people.

“I’ve got family members who do drugs and I’ve seen it wipe a lot of people out,” Hunt said. “I’ve got a couple of friends who are dead now because of

Through a local FBI agent, he was introduced to SBI agent Randy Myers, who then was investigating drug selling in Robeson County. Hunt said he agreed to work with Myers after the two discussed names of people they knew or suspected of drug dealing. On the top of their list was a man named James “Bunk” Maynor.

In October 1986, Hunt said he set up a cocaine deal with Maynor during a tape-recorded telephone conversation and later met with Maynor with the intent to purchase cocaine while he was wired with a sound device. Federal court records in Raleigh show James H. “Bunk” Maynor, 37, plead guilty in federal court January 1987 on charges of using a telephone to facilitate a drug felony, and possession of cocaine with intent to distribute. For the two charges, he was sentenced to serve a total of 19 years in prison and fined a total of $375,000.

But by helping get Maynor, Hunt said he placed his own life in peril when he agreed to testify at Maynor’s trial. His name appeared in local newspapers the next day identifying him as a confidential informant.

“I probably have talked to every drug dealer in this area, so this really put my life in danger,” Hunt said.

He agreed to take the stand only after Myers assured him he could arrange with a U.S. marshal to get him a new identify and relocate him to thwart any retaliation. Hunt also said SBI agents told him they would help get him off probation.[…] 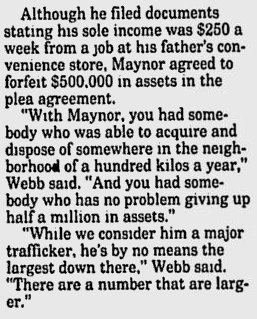 According to the federal Bureau of Prisons, Maynor was released in 1993.   Fast forward to 2014.  Pembroke, NC-based Metcon construction identified Maynor as a “vice-president” with the firm.  (Metcon, you may recall, is also at the center of the efforts in Raleigh to approve build-lease deals for public schools.  But that’s another story.)

A 2015 local news story in Robeson County identified Maynor as “chairman” of Metcon.