Chris Fitzsimon, Bill Barber and the gang want us to believe that the GOP majority in Raleigh has cut state government to the bone.  Thom Tillis — the state House speaker currently running for US Senate — tells us he’s “North Carolina’s Conservative Voice.”

But a devastating new report from the folks at the John Locke Foundation illustrates that state spending — outside the general fund — has been growing by leaps and bounds before and during the conservative revolution:

North Carolina state government spending has grown “significantly” in recent decades, though much of that growth has been hidden beneath headlines that focus on the state’s General Fund. That’s a key finding from a new John Locke Foundation Spotlight report.

The report urges policymakers to focus on total state spending, which reached more than $51 billion, an average of $5,348 per person, in 2012. Since 1980, inflation-adjusted state spending has grown by more than 150 percent.

“Regardless of competing political platforms and campaign speeches about the state budget, one thing is clear: North Carolina’s inflation-adjusted per-person budget expenditures increased significantly over the last 30 years,” said report author Sarah Curry, JLF Director of Fiscal Policy Studies. “In particular, there have been rapid increases in state spending across all categories in the last 10 years. That’s a dangerous precedent when one considers that the financial stability of state and federal governments is not at its strongest.”

State government reached its highest General Fund appropriation in 2009, with an inflation-adjusted amount of $22.5 billion, Curry reports. “Since that time, General Fund spending has been slowly decreasing, but total state expenditures have increased, as more and more state spending moves outside the General Fund.”

The shift away from the highly publicized General Fund has created a lack of transparency in North Carolina’s budget process, Curry said. “Government budgets have a reputation for being difficult for the typical citizen to understand, and North Carolina is no exception,” she said. “For many, the persistent growth in state spending is not easily visible because of the undue focus on the General Fund, particularly within the media.”

“North Carolina has received about 45 percent of its total budget from the federal government over the past 10 years,” Curry said. “The number was even higher in 2010 and 2011, when the so-called federal stimulus package boosted federal funding to a historic high of 56 percent of North Carolina’s total budget.”

State government officials should be “wary” of allowing such a large part of the state’s expenditures to be dependent on federal funding, Curry said. “In reality, the federal government borrows all of this money before sending it to North Carolina state government,” she said. “This funding source suffers from the same uncertainty that plagues all of Washington’s deficit spending.”

Because of the lack of transparency in state government spending, many people might not realize that the state spends more on health and human services than on education, Curry said. “Since 2005, during former Gov. Mike Easley’s administration, the total HHS budget has been consistently higher than the total amount of funds spent on public education.”

Within non-General Fund spending categories, North Carolina spent about $4.5 billion on transportation-related items in the most recent fiscal year, Curry said. “That expense has grown by 123 percent since 1980,” she said. “In addition, the state’s debt service spending was relatively stable until surges in 1997 and 2003. Debt service spending increased by 193 percent during this period.”

A focus on total state spending would help policymakers who are interested in improving North Carolina’s economy, Curry said. “Total state spending is a more complete measure of the extent to which state government diverts real resources — land, labor, and capital — away from the private sector, where all economic growth is generated,” she said. “This diversion, also known as ‘crowding out,’ leads to less economic growth and job creation. This is why our elected officials must begin the process of reducing the size of state government.”

Curry’s report also urges legislators and taxpayers to consider budget approaches designed to address spending growth, such as a Taxpayer Bill of Rights and a budget process that would detail non-General Fund spending.

“The specific course of action will not be agreed to overnight, but there are ample opportunities, particularly during the break between legislative sessions, to begin reforming the budget process in a way that looks at the whole picture,” Curry said.

Check out this neat graph from the JLF report: 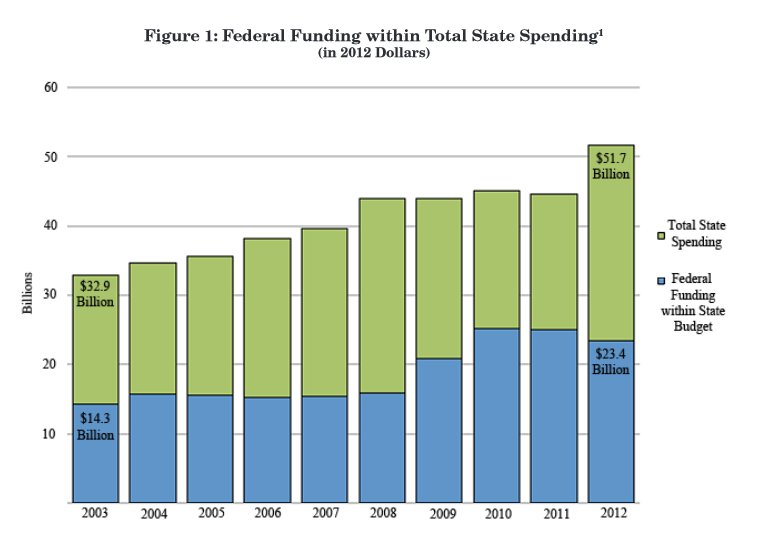 And don’t forget this ONE: 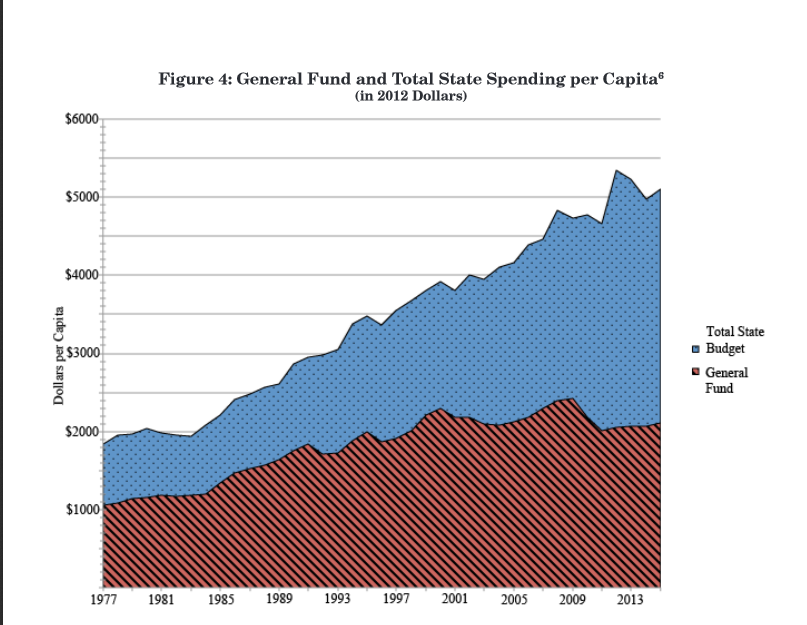