After reviewing the driveby media over the last several weeks, I am convinced our two US senators are competing for the title of DUMBEST member of ‘The World’s Greatest Deliberative Body.’  (It’s neck-and-neck between these two right now.)

Thom Tillis thinks the Border Patrol has things under control in California, and Richard Burr joins John McCain, Lindsay Graham-nesty and all the Democrats in seeing some kind of evil conspiracy in President Trump’s firing of FBI director James Comey.   (Firing the guy DOES complicate the “probe.” One less face to put in front of the camera to keep this bullshit afloat.)

Never mind Comey told Trump THREE TIMES he wasn’t probing Trump.  Never mind EVERYBODY with any direct knowledge of the matter — even Diane Feinstein — says there is no evidence tying Russia to the success of the Trump campaign in November.  Dick Burr thinks we needs ta’ be investigating’ some-tin’.

Just DAYS AGO, leftists were bashing Comey for betraying Hillary Clinton — sabotaging her for Trump’s benefit.  (Hell, the idiots in the audience of Stephen Colbert’s unwatchable show were applauding news that Comey got fired.  They’ve been programmed to believe Comey is bad because he ‘hurt’ Hillary.)

Comey had already testified before the House that — as late as August and September 2016 — the Russians had begun assuming Hillary was going to win the presidential race.

Now the left has switched gears and branded Comey a hero — a victim of the evil Trump.  From villain to hero in a matter of days.  And there is the Big Dummy himself — Dick Burr — providing all kinds of “bipartisan” cover for this nonsense.

The drivebys are slobbering over reports that Comey had asked for more money for the Russia-Trump probe right before getting fired.  THAT would have certainly kept Dick Burr in the drivebys’ sights, if it had been successful.  (If Comey was seeking more government money to probe this nonsense, he deserved to be fired.  What a waste.) 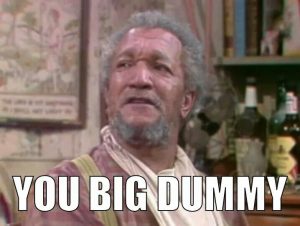 5 thoughts on “Can Richard Burr REALLY be this stupid?”