It always cracks me up to hear politicians and bureaucrats tell voters: “It won’t cost you a thing! We swear.  The feds are picking up the tab.”

Yeah.  And WHERE pray tell do the feds get the money to pick up said tab? 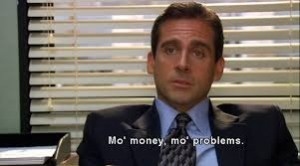 The good folks at Civitas are promoting an interesting new study on the relationship between federal government spending and that of local and state governments.  Here are some of the study’s findings:

[…] Our results clearly demonstrate that federal transfers to state and local governments result in higher own-source revenue, taxes, and fees.

• Regression results indicate that state and local revenues from taxes, fees, and other own-sources will rise by 82 cents for each additional dollar in federal transfers.

• Graphical analysis supports the statistical analysis and suggest that each additional dollar in federal transfers is associated with an increase in state and local taxes and fees of 74–88 cents.

• Recent peer-reviewed research published in the widely cited academic journal Public Choice supports our findings by concluding that each dollar of additional federal grants to states is associated with a total increase of 54–86 cents in new state and local taxes.

Federal transfers to states have grown from $74 billion a year in 1980 to almost $300 billion in 2012. Based on our results, state revenues from taxes, charges, and other own-sources will rise by 82 cents for each additional dollar in federal transfers.

A hypothetical 10 percent increase in federal transfers would amount to about $62 billion to the states. Using our regression results, and holding personal income constant, this would be associated with approximately $50 billion in additional increased taxes, charges or other revenue sources, or an additional government burden of $158 per person.

Importantly, our results suggest that the increases in federal grants to state and local governments associated with the ACA’s Medicaid expansion will have significant future tax implications at the state and local level as these governments raise revenue to continue, expand, and promote these newly funded programs into the future and as federal support tapers off once the expansion is in place.[…]