McCrory replaces State Board of Elections as inquiry into 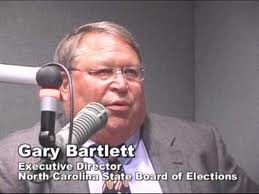 That’s the headline screaming at us from behind the McClatchy-Raleigh paywall.  The average low-information voter — perhaps one of the few remaining paying McClatchy subscribers — would look at that headline and say something like:  “Hmmm.  It sure does look like THAT Pat McCrory is covering something up!”

First off — that “inquiry” being referenced refers to money from an indicted Oklahoma businessman that made it into the campaign coffers of  A LOT of North Carolina legislators in BOTH PARTIES.

Is there something fishy going on here with McCrory’s personnel moves at the board of elections?  Let’s see. You have to read ELEVEN paragraphs of the McClatchy story before you get to a McCrory spokesperson talking about how the board members’ terms expire on April 30.   Is that true?   According to NC General Statute 163-19, new four year terms for state board of elections members begin on May 1 of the first year of each gubernatorial term.   THAT would be THIS Wednesday.

State law also stipulates that the board’s majority will be in favor of the governor’s party.   For twenty years, we’ve had Democrat governors.  So, for twenty years, we had a Democrat majority.  Now, we have a GOP governor.  So, it’s time for the majority to flip to the GOP.

We get an awful lot of Bob Hall in this story.  (Bob and Blinkin’ Chris over at NCPolicyWatch appear to be the ONLY two people allowed to comment on state politics in McClatchy publications.)  The first news reports I could find about the indicted businessman giving money to NC politicians were in March of this year.   Bob Hall asked for an investigation THIS week.

Hall is a smart guy.  He HAD to know that terms of existing board members expire on May 1.  Was the timing of his complaint filing aimed at keeping the current BOE board — majority Democrats — in place for the soon-to-be-conducted investigation (putting heat on Team McCrory if they dared to remove ANY of the existing Democrat members)?

We get all kinds of glowing comments in the McClatchy article about the diligence of our state elections board.  Civitas offers a starkly contrasting viewpoint HERE, HERE, and HERE.  Check out executive director Gary Bartlett’s reaction to some rather damning footage about NC voter fraud shot by conservative activist James O’Keefe.  Instead of calling for an investigation of the evidence revealed by O’Keefe’s footage, Bartlett called for an investigation of O’Keefe & company.

Bartlett also shrugged off evidence of 112 year olds with active voter registrations.   Bartlett also apparently conspired with Hall and his leftist advocacy group to plan a partisan PR assault on Republicans in the General Assembly.

2010 and 2012 ushered in a lot of new blood into our fair capital city.  It’s very likely a good time to sweep some new blood into the offices of the state Board of Elections.

One thought on “Blueprint 101: Spin SOP so that it looks — and sounds — like a sordid scandal”