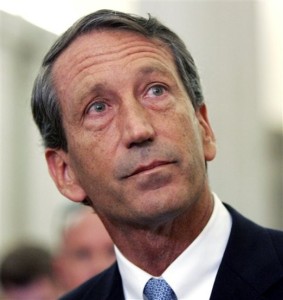 The GOP establishment never ceases to amaze me.  These people hear the mainstream media and the lefties make some outrageous claim (i.e., Repubs are anti-women, anti-black, anti-Hispanic, anti-gay, anti-poor, anti-elderly), accept that premise as FACT, toss aside the conservative platform,  and then start panicking and back-peddling furiously to “PROVE” they are not any of the things those people said.

The groping and sexual aggression of Ted Kennedy and Chris Dodd — or the Oval Office intern molestations perpetrated by Bill Clinton — didn’t do anything to paint the Democrat Party as “anti-woman.”   Robert Byrd — a former recruiter for the Ku Klux Klan — served as a US Senator, and majority leader, for the Democrats for roughly half a century.  THAT apparently didn’t tar the Democrats as racist.

The latest bit of nonsense coming out of the RNC is that they are pulling funding for the campaign of former South Carolina governor, and current congressional candidate, Mark Sanford.   Sanford’s offense?  He won a congressional primary, despite having a messy divorce.

The guardians of all that is decent and pure at the National Republican Congressional Committee have made this call.   Never mind that The Club for Growth has declared the NRCC chairman a “RINO” and is seeking a primary opponent for him.  Apparently, congressman and NRCC chairman Greg Walden (RINO-Oregon) doesn’t think it’s kosher to try to rein in spending on federal entitlements.   *Screw the economy. We’ve got to make this guy Sanford PAY for getting a divorce. *

The so-called conservative intelligentsia (i.e., Ann Coulter, Bill Kristol) have been viciously attacking Sanford and his campaign.  Stop and think for a minute, folks.   NEWT GINGRICH WON the 2012 presidential primary in South Carolina.  How many messy divorces has that guy had?  Maybe you guys need to give voters in The  Palmetto State a wee bit more credit.  Maybe ideas DO matter to them.

At one point, I had hoped then-Gov. Sanford would jump into the 2012 GOP presidential primary.  He had a solid record of standing up to RINOS in DC and Columbia in the fight to cut spending, taxes, and government.  When the details of his, um, ‘Appalachian Trail hike” hit the media, I was appalled and disappointed.

Sanford provided a pleasant surprise by coming clean about the whole affair.  Unlike John Edwards, he didn’t try to deny it or pin it all on an aide.  Unlike Bill Clinton, he didn’t try to weasel out of it by debating the definition of the word “IS.”

Admittedly, disappearing from the governor’s mansion to flee to Argentina comes off as a wee bit eccentric — crazy, some might say.  Of course, RINO legislators who had been repeatedly shot down by the governor took the opportunity to make their beleaguered chief executive PAY.  Should exhibiting strange or eccentric behavior disqualify you from serving in Congress?  If it did —  things would be awfully quiet on C-SPAN.

The sordid details behind the breakup of Mark and Jenny Sanford’s marriage are NONE of our business.  Divorces often involve legal tit-for-tat and occasional interaction with law enforcement.  (I have a friend whose spiteful soon-to-be-exwife took out warrants on him for fabricated charges every week for 17 weeks straight.  It took him a while to get all of those dismissed.  He is still working on getting his record expunged.)

Sanford is running for Congress in a town that knows him well.  He has lived there a long time.  Sanford represented these people in Congress prior to being elected governor of South Carolina.  They know him a hell of a lot better than the know-it-alls in DC do.

I know a thing or two about The Palmetto State.  I was born 20 miles from their state line.  I have plenty of friends and family there.  I also spent time there as a journalist.    South Carolinians are fiercely independent and have a healthy respect for strong personalities that sometimes march to the beat of a different drummer (i.e., Strom Thurmond and Fritz Hollings).  The state has a proud tradition of thumbing its nose at big government — especially in 1776 and that little affair that kicked off in Charleston Harbor in 1861.  The Democrat Party has been reduced to a joke in the state.  The last Democrat governor to be elected got there thanks, in large part, to then-incumbent Republican David Beasley’s efforts to take the Confederate flag down from above the statehouse in Columbia.

Unnamed GOP establishment types are moaning about how a  Sanford victory will make the party look anti-woman.  Really?  The current governor of South Carolina is a REPUBLICAN WOMAN of INDIAN DESCENT.   I thought conservatism was all about letting people succeed based on their talents and hard work.  Why in God’s name is the so-called conservative party stooping to play the leftist racial and gender politics game?

It is sickening how the RNC and NRCC have repeatedly adopted the MSM and lefty narrative and sabotaged their own candidates (i.e., Missouri, Indiana).  Neither Mark Sanford’s divorce nor the abortion views of Todd Akin or Richard Mourdock have ANYTHING to do with getting this economy back on track.  Akin and Mourdock would have been solid DESPERATELY-NEEDED conservative votes in the Senate.  Sanford will be a solid conservative vote in the House.

It’s sad, but this is what you get with a national party that wants to play Me-Too with Big Barry and run furiously away from its conservative heritage.  When GOP leaders are whipping votes in favor of debt ceiling increases, tax increases, and spending increases, the Grand Ol’ Party becomes part of the problem in DC.   The differences are blurred between the two parties, and you open yourselves up to uncomfortable, irrelevant-at-the-federal-level discussions about nonsense like obstetrics and Mark Sanford’s divorce.