In the upcoming primary for governor, we’re sure to hear a lot about Dan Forest and a guy named Eric Lindberg.  It’s only fair that we also get the straight story about the Grange family business and its relationship with the Hillary Clinton State Department (and Hillary cronies) during the time of the Libyan revolution and the Benghazi fiasco.

State Rep. Holly Grange, with the encouragement of the Tillis political machine, has decided to join Forest in the 2020 primary for governor.   Grange and her husband, David, own a consulting business called Osprey Solutions.  David Grange — a retired general — and Holly Grange have both been quoted in the media suggesting that Osprey focuses mostly on humanitarian projects.  In fact, here’s what Mr. Grange told The New York Times:

[…] David Grange told the Times that he knew Blumenthal tangentially through a third company, New York-based Constellations Group, that was to provide business leads in Libya that Osprey would follow up on. He told the Times the venture, to create floating hospitals to treat war wounded and to build schools, fell apart partly because nobody could get a firm grasp on who to trust or work with in Libya.[…]

Yet, the drive-by media has reported that, while in the service, David Grange commanded some super-secret special forces units and is now continuing some of that work in the private sector with Osprey:

[…] Like Blumenthal, Drumheller has a somewhat questionable reputation. He left the CIA in 2005 and wrote a book accusing his superiors of ignoring his warnings that evidence used to justify invading Iraq was flawed. Former CIA director George Tenet, who served under Bill Clinton and George W. Bush, used several pages of his 2007 memoir At the Center of the Storm to discredit and otherwise challenge Drumheller’s version of events.

As for what these two men were doing working together, emails show Drumheller was producing intelligence reports on Libya and other trouble spots that Blumenthal was passing on to Secretary Clinton. Drumheller was also coordinating operations with Osprey Global Solutions, an outfit headed by David L. Grange, a retired major general with a background in special forces. Osprey Global Solutions was being paid—we don’t know by whom—to send men to terrorist hot spots such as Tunisia to gather intelligence that was also passed on to [Hillary] Clinton. […]

And then there was THIS:

[…] The memo touts Osprey’s founder and chief executive, retired General David Grange, as the man who can help whip Libya’s opposition — the Transitional National Council, or TNC — into shape so it can take Tripoli. Blumenthal wrote that Grange’s company would provide direct training for Libyan fighters without the U.S. military having to be on the ground. “This is a private contract. It does not involve NATO. It puts Americans in a central role without being direct battle combatants,” Blumenthal wrote. “The TNC wants to demonstrate they are pro-US. They see this as a significant way to do that.”

Sooooo — we have Hillary’s #1 crony touting the Grange family business right about Benghazi time.   And I’m not hearing anything about floating hospitals.  (Interesting.) 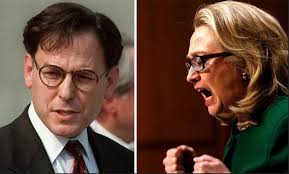 […] Grange told me last week that he met Blumenthal only once, after being approached by Bill White, the chief executive of the consulting firm Constellations Group, to gauge his interest in doing business with the post-Qaddafi government in Libya. Constellations Group specializes in connecting people. In a 2013 interview, White said he helped put together the sale of Blackwater — the military contractor that became a target of Democrats during the George W. Bush presidency — to Academi.

Grange said his understanding was that if he won any contracts in Libya, Constellations Group would get a percentage of the revenue as a finder’s fee. He did not know what Blumenthal’s relationship was with Constellations Group. “At that time I didn’t know if Blumenthal was doing this as a favor for Bill or if he was getting paid,” Grange told me. “I had no idea.”

Blumenthal’s memo to Clinton also misstated Grange’s experience. Blumenthal wrote that Grange had helped devise the plan for U.S. Special Forces to take Baghdad in 2003. Grange told me that he was already retired from the Army by then and had nothing to do with the operation.[…]

And let’s consider THIS while we’re at it:

“Sid, you are doing great work on this,” Drumheller wrote to Blumenthal. “It is going to be around $60,000, coverting r/t business class airfare to Tunis, travel in country to the border and back, and other expenses for 7–10 days for 4 guys.”

[…] After Blumenthal forwarded that note to Shearer, he wrote back questioning the cost of the operation. “Sid, do you think the general has to send four guys. He told us three guys yesterday, a translator and two other guys. I understand the difficulty of the mission and realize that K will be repaid but I am going to need an itemized budget for these guys.”

“The general” and “Grange” appear to refer to David L. Grange, a major general in the Army who ran a secret Pentagon special operations unit before retiring in 1999. Grange subsequently founded Osprey Global Solutions, a consulting firm and government contractor that offers logistics, intelligence, security training, armament sales, and other services. The Osprey Foundation, which is a nonprofit arm of Osprey Global Solutions, is listed as one of the State Department’s “global partners” in a 2014 report from the Office of Global Partnerships.’[…]

One thought on “Benghazi. Hillary. And the Grange Family Business.”