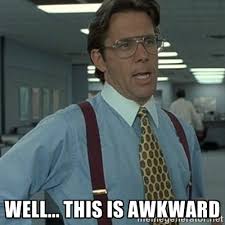 Yep, that’s how it feels to find oneself on the same side of a debate with the ACLU:

Officials with the ACLU of N.C. are taking aim at a Republican state lawmaker’s blistering response to this weekend’s scathing street-shaming of former Gov. Pat McCrory.

In the video, McCrory, along with conservative Fox commentator Lou Dobbs, is pursued down a Washington, D.C., alleyway by a band of protesters, some of whom shout, “Shame on you!” and denounce McCrory as an “anti-gay bigot.”

Shortly after the video went viral, N.C. Sen. Dan Bishop, a Republican lawyer from Charlotte, told The News & Observer that he believes such heckling should come with a five-year prison sentence.

However, leadership with the ACLU are denouncing Bishop’s proposed legislation as a violation of the First Amendment’s free speech provisions.

“People’s right to criticize politicians – whether in a newspaper, at a meeting, or on a public street – is the very heart of what the First Amendment protects,” ACLU Policy Director Sarah Gillooly said in a statement to Policy Watch.[…]

But then these SAME people turn around and bully and crack down upon an artist for daring to (a) say nice things about Donald Trump, or (b) perform at his inauguration.

Dan Bishop is a good man.  (For the record, he and I have a number of common acquaintances.)  But I think he got a little too excited here.  It is already a crime to threaten or intimidate other people — even government officials. Every so often, you will read a crime story in the paper where some dirtbag gets hit with a charge of “threatening a government official”  (cops, or a judge) as part of the long, felonious laundry list that is sending him to jail.

Jim Hunt, Mike Easley and Bev Perdue don’t have to worry about this stuff.  These people are their voters — their fan club.

I could very well see politicians abusing Bishop’s legislation: * “The Daily Haymaker is intimidating me.  I don’t feel as comfortable lying and stealing as I normally do.  Lock them up.”*

I think the best way to take advantage of situations like this is to really show off these people’s antics.  Get the video of the rampaging leftist nutcases all over the Internet.  Get it in front of every sane voter from Murphy to Manteo.  Show them what Roy Cooper and Josh Stein’s followers look like.  Show them what a bullet they dodged by electing Trump.