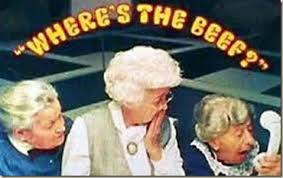 from a lender” to Gov. Pat McCrory (R-NC) and congressman Mark Sanford (R-SC).  Democrats have been crowing across cyberspace — with visions of Watergate or Iran-Contra or J (*oops, not him*) dancing in their heads.  I read the AP piece, and I — like the late Clara Peller — want to know: “Where’s the beef?”

The drive-by co-authors suggest something improper happened when both Sanford and McCrory — former board members of Lending Tree — cashed out of their financial arrangements with the firm:

The two Republicans served as directors at Tree.com, the Charlotte-based corporate parent of the website LendingTree. As board members, they were entitled to large chunks of restricted company stock if they held their positions long enough. Both resigned after their election victories, which would have rendered their unvested stock worthless had the board not taken special action to provide them early payouts.

McCrory and Sanford deny they did anything improper by accepting the payments from Tree.com, which were not fully described in their ethics statements. Their timing and total value are only being revealed now, as the result of an Associated Press investigation into the company’s financial records and interviews with Tree.com officials.

Early vesting of restricted shares for departing directors is not unheard of in the corporate world.[…]

There are numerous problems with the AP piece.  First, it is basically a rehash of some opposition research the Democrats passed to their friends at WRAL in February 2012.

That Jan. 30, the board voted to accelerate the vesting of McCrory’s 10,063 restricted shares of Tree.com stock, valued on that date at $171,071, even though thousands of the shares were not due to vest for another 16 months.

Without the board’s action, the shares would have expired, making them worthless. Tree.com founder and Chief Executive Officer Doug Lebda told the AP in an interview that the decision to accelerate the vesting of the shares for retiring board members is standard practice at the company.[…]

McCrory also was paid $4,375 in directors’ fees for his board service in January 2013, the records show, although McCrory spokesman Ellis said the governor did not participate in the board meeting for which he was paid. That is a relatively standard practice for corporate boards.

Tree.com declined to provide AP copies of the board minutes.

Lebda, who has given thousands to McCrory’s and Sanford’s political campaigns, said he had asked McCrory to delay his resignation to give them time to find another independent director.

But records show McCrory’s seat remained vacant for more than a year after his resignation. Company spokeswoman Megan Grueling later clarified that Lebda had asked McCrory to stay to give them time to shift committee assignments to meet SEC requirements.

Even after McCrory’s departure, Tree.com paid its directors a special $1 per share cash dividend on any unvested stock they held at the end of the prior year, giving the governor another $10,063 on April 12, 2013, according to the SEC records.

During his four years on the Tree.com board, records show McCrory received more than $600,000 in director’s fees, dividends and stocks.

“I can tell you he added 10 times more value than any of the compensation he received,” Lebda said of McCrory. “He gave us insight and guidance. He was worth it.”

North Carolina officials are required to disclose their business dealings and their sources of compensation on annual ethics forms. Knowingly providing false information or concealing sources of income is potentially punishable by removal from office and up to eight months in prison.

It’s too bad there is no prison time for drive-bys who “knowingly provide false information.”  (Talk about a prison over-crowding problem!)

[…] On his forms covering 2012, McCrory listed Tree.com stock holdings of more than $10,000. But, though he was on the company’s board for that entire year, he omitted his “business association” with the company and the potential conflict of interest caused by the state banking commission’s licensing of its LendingTree subsidiary.

On his forms covering 2013, McCrory didn’t disclose his $14,438 in fees and cash dividends from Tree.com. The forms specifically ask officials to include stock dividends and fees exceeding $5,000.

In a statement, Ellis said that under state law, the governor wasn’t required to disclose his cash compensation from Tree.com because he had disclosed his company stock holdings earlier on the form. As for the other omissions, Ellis said the instructions on the ethics forms were unclear.

Okay, so we’re reduced to nit-picking on whether bureaucratic forms were filled out correctly? MORE:

George Wainwright, chairman of the North Carolina Ethics Commission, said he couldn’t comment because the issue may become the subject of an ethics complaint.

McCrory has been reluctant to reveal his business dealings. As a candidate, McCrory refused to release his tax returns or reveal the companies he consulted at the Charlotte law and lobbying practice where he worked before taking office. Records show two of the firm’s lobbyists represented Tree.com.

OK.  So, it’s BAD that McCrory cashed out his Lending Tree stock, and it’s ALSO BAD that he kept his DUKE STOCK? How is ol’ Pat supposed to win here?

Buried at the bottom of the story, the writers admit that there is no evidence of any on-going business between Lending Tree and state banking regulators.  They also proceed to detail “trouble” Lending Tree had in other states.  (What that has to do with the GOVERNOR OF NORTH CAROLINA, I don’t know.)

It’s  shame these two lunkheads at the AP have foresaken their serious constitutionally-protected duties to do the dirty work of that punk (and former WTVD ABC11 reporter) Gerrick Brenner.

3 thoughts on “AP drive-bys snipe at top Carolinas GOPers, miss by a mile”