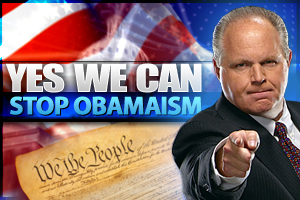 The Great One, the maha-Rush-ee himself,  delivered this piece of wisdom on Madame Governor and her totalitarian fantasies on his Wednesday radio show:

The Drive-By Media spends a lot of time and a lot of effort trying to make Sarah Palin, Michele Bachmann, the South Carolina governor Nikki Haley look dumb. The Drive-Bys try to make them look stupid, bumbling, and foolish; and all the while they have a female politician in their midst who is dumb, stupid, bumbling, and foolish; and they’re out there trying to make excuses. “Oh, she was just joking! You shouldn’t take this seriously. She was just joking about this.” No, she wasn’t joking. If they could get away with canceling elections, they would do it. That is who the Democrats of today are. That’s what the American left is all about. You know, not to draw any connection or comparisons (far be it from me to do that), but Adolf Hitler would agree with Beverly Perdue.

Once Hitler was elected, he said, essentially, “The people have decided. Why do we need to keep asking them what they think over and over again?” Don’t forget what Pelosi said some months ago. Pelosi was out there saying (summarized), “You know, you Republicans, you need to change the way you are so that it doesn’t really matter who wins elections as much as it does. It matters too much who wins elections. You need to change so that it doesn’t matter.” Well, what did that mean? It meant, “You Republicans have got to get rid of your conservatives. You have got to get rid of the conservative wing of your party. You’ve gotta make it so they don’t win anything.

“We’ve gotta get back to the way it was in the old days when Bob Michel ran the Republicans in the House and you had 120 members in there and you went and played golf all day and you didn’t care about what the legislation was ’cause you knew you couldn’t stop it. That’s what we Democrats want! Peace to us is the absence of opposition. We don’t want any elections, and we don’t want any opposition — and if we have elections, we don’t want elections that we’re gonna lose. So why don’t you Republicans just get rid of your conservatives and see to it that when they do have election results, whoever wins doesn’t matter that much ’cause we’re all the same when you strip it away?” Well, they’re not all the same when conservatives win elections.

Here’s Beverly Perdue, now. Here, listen to this again, and you tell me if you think Beverly Perdue’s joking or being jocular or trying to evoke laughter.

PERDUE: I think we ought to suspend, perhaps, elections for Congress for two years and just tell them we won’t hold it against them, whatever decisions they make, to just let them help this country recover. I really hope that someone can agree with me on that.

RUSH: Man, oh, man! The Constitution doesn’t matter. Look at what the definition of “helping the country recover” is. Now, somebody sent me an e-mail, Rush: “Why would she do this? If they’re canceling the election she’s guaranteeing a huge Republican majority.” Well, they’re in a world of hurt. She wants to cancel the elections because 2012 could dwarf 2010 in terms of Republican victory/Democrat loss. What could happen in November next year… I’ll tell you if the election were in one month or two months, the Democrat Party would end up with the smallest number of elected representatives in the House of Representatives maybe in history. That’s what they all know, and coming back from that… Even now, coming back after the Republicans take 63 seats, a huge majority in the House?

The Democrats getting that house back; that is a major, major undertaking. If you have another election that mirrors 2010, the Democrats are looking at being out of power in the House of Representatives for who knows how long. And this comment of hers, it’s not off the cuff. She had to think about this. She’s out there making the pitch to a Rotary Club — and, of course, all of this is done to “save the country.” These elections, you know, they have to spend so much time fundraising and they have to spend so much time in their districts. It takes them away from their jobs and we really need them working on jobs. We need them creating jobs.

Which is bull. They don’t “create jobs” in the House of Representatives; they get things out of the way for people to do. So they’re in a world of hurt, folks. Not to tell you to get overconfident here. As we sit here today, I’m telling you the lay of the land. I say it rather joyously because it reassures me that we’ve not lost the country as far as the people are concerned. It’s just obvious now what an aberration — an abnormality, if you will — Obama is. This is not what people thought they were getting, it’s not what people want, this is not the direction they want the country to go and they’re going to show up in record numbers in November to say so. The Democrat response? Let’s cancel the election. “Ah, she’s just joking. She’s just joking. You couldn’t hear that? She’s just trying to have some fun out there.” It’s a strange thing to joke about. You better be obvious you’re joking if you’re gonna say something like that, and she wasn’t. She’s dead serious. The next time they tell you how stupid Sarah Palin is or Michele Bachmann, just think back to this day and North Carolina Governor Beverly Perdue.